An Auckland woman whose daughter is stuck in Wuhan says the New Zealand government needs to act fast if it decides to evacuate its citizens and residents. 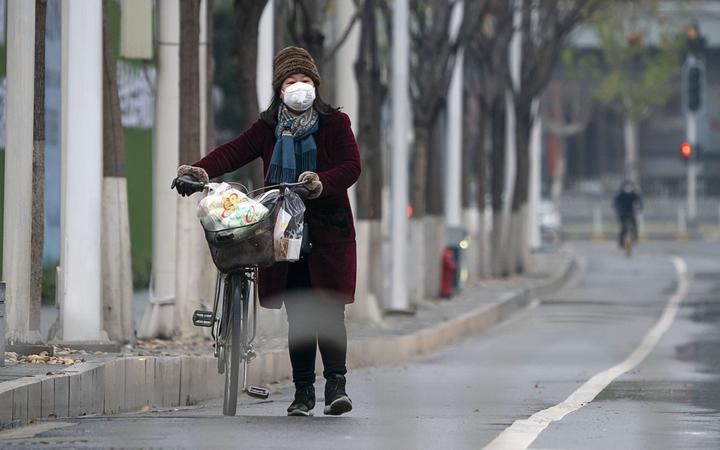 A woman wearing a mask walks along a street in Wuhan, in central China's Hubei Province on 26 January 2020. Photo: AFP

There are 53 New Zealanders registered as being in Wuhan City on the government's SafeTravel website, around 20 of whom have asked for consular help.

Joanna's mother, Amy, lives in Auckland and said she's worried about her daughter, who travelled to Wuhan on 20 January to visit her father for the Chinese New Year.

The interview has been translated.

"I feel that people in New Zealand are worried about people who come from China, not only Wuhan. People don't want them to come back to New Zealand," she said.

"I have this idea: New Zealand can follow suit with the United States to arrange a government-chartered plane, and after arriving in New Zealand take them to a designated place.

"The passengers can quarantine themselves there for two weeks and then go where they need to go."

She believed it would be safe for those returning, and people in New Zealand could be reassured as well.

That way the government wouldn't have the pressure about the possibility of an outbreak here.

"Secondly, I think the government needs to act faster - just as I know, at least nine children are stuck there. My daughter is also a young person. I think after a while, their mental health would be affected. They can't stay there all the time. "

When asked if her daughter had any friends there, she said there were some relatives.

"Some other people - for example, my younger sister and younger brother and their kids - all have friends and work associates in Wuhan. There are constant communications that can make them feel connected. They can feel the warmth from other people.

"However, my daughter left Wuhan and went abroad when she was 15 years old. She hasn't been living in China for more than a decade. She doesn't have any friends or other associates. She must have been feeling lonely," she said.

"Of course, I've been trying to encourage her and try to give her some positive energy, but I'm really worried because I don't know how long the city will have to be in lockdown.

"I hope the government can see such kind of situations there ... this is just what I want as a mum."

The Ministry of Foreign Affairs and Trade is exploring options to evacuate New Zealanders from Wuhan in China.

A spokesperson said it was considering flying New Zealanders out on charter flights or with the Defence Force.

"The US is the only partner country at this stage to deploy charter or military assets to assist US citizens."

Ardern added that MFAT was not aware of any New Zealanders in Wuhan showing flu-like symptoms.

The Ministry of Health said there were no cases of the coronavirus in the country, following reports of a suspected case in Queenstown which turned out to be a false alarm.

Health Minister David Clark said the country was prepared to tackle the virus which was now listed as a a "notifiable disease", meaning medical officers of health would be bale to restrict travel or issue 72-hour detention orders to those infected.

"As of today, the National Health Coordination centre has been activated to coordinate the response to the novel coronavirus," he said.