The father of a girl who lost both of her hands in a bus crash near Queenstown has been able to get to her Christchurch Hospital bedside, thanks to a pair of flight businesses. 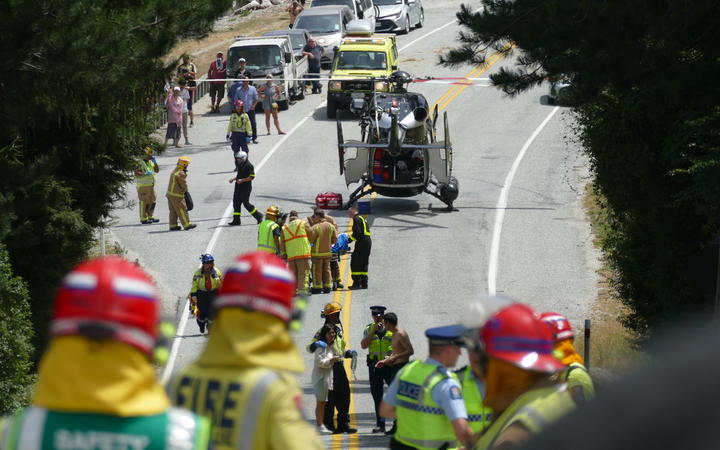 Emergency services at the scene of the crash on the Queenstown-Glenorchy Rd on Tuesday. Photo: ODT / Tracey Roxburgh

A man has been charged with careless driving causing injury following the crash on the Glenorchy-Queenstown Rd on Tuesday, which left five people needing hospital treatment.

It was the third serious crash involving tourists in the Queenstown area in recent weeks.

The Otago Daily Times understands a girl lost both hands in the crash and a woman lost a hand.

The father of the girl was also injured in the crash and was initially taken to Lakes District Hospital.

At first it appeared he would not be able to get to Christchurch to see his daughter on Tuesday night, as no flights were available from Queenstown.

But two flight businesses rallied to help get him north.

Glenorchy Air managing director James Stokes said after working with Air Milford, he flew the man, who was still in his hospital gown, to Christchurch.

He said the man's English was ''extremely limited'', but ''he was certainly grateful to get to Christchurch''.

''He was about as calm as he could be in the situation.

Emergency services arrived at the crash scene, 7km southwest of Queenstown, about 1.45pm on Tuesday, where they found a bus had rolled on to its side.

A Southern District Health Board spokeswoman said one patient was flown to Dunedin Hospital and one to Christchurch Hospital.

Three people were taken to Lakes District Hospital, and one of those was transported by ambulance to Dunedin Hospital later on Tuesday night.

As of yesterday afternoon, both patients in Dunedin Hospital were in a stable condition, she said.

Those on board the bus, including the driver, were all from China.

The man is expected to appear in the Queenstown District Court on Monday.

A representative from Awing Travel NZ Ltd, the company which owned and operated the bus, declined to comment yesterday.

An ownership report shows the 2018 Yukon bus passed a certificate of fitness in September last year.

The Chinese Consul General has visited the injured person in hospital in Christchurch.

A spokesman said the two patients' injuries were serious but not life-threatening.

The remaining passengers were transported to their accommodation in Queenstown on Tuesday night and arrangements were being made by their tour company regarding their return to China.

Insp Jensen reminded people to take ''extra care'' on southern roads, which were especially busy during the summer as domestic and foreign tourists flocked to the region.

A man was also critically injured in a crash on Frankton Rd on 11 January.

*This story was first published on the Otago Daily Times