A Bryde's whale has died this morning after becoming stranded near Dargaville in Northland. 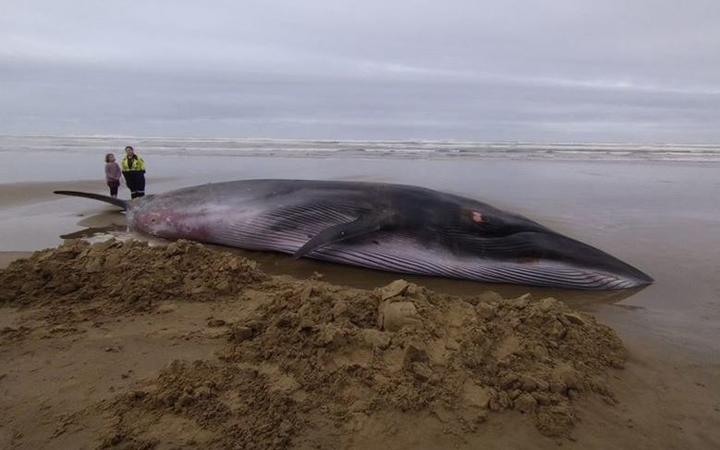 After being alerted this morning the Department of Conservation (DOC) and fire trucks rushed to Glinks Gully, and whale rescue group Project Jonah was on the road to the site.

DOC said the whale will lie in situ for the time being.

"DOC is working with local iwi on their wishes for the next steps, which may include flensing or burial. As the tide is now coming in, nothing will be done until low tide," a spokesperson said.

Preparations were being made to refloat the whale at high tide early this afternoon.

DOC earlier said the whale was a humpback but have now confirmed it was a Bryde's whale, which is listed as an endangered species.

Project Jonah general manager Daren Grover was on his way to the beach when it died. He said it was about 10 metres long and weighed several tonnes.

Grover said it's unusual for a whale to be that far north at this time of year, which might have meant it was distressed, unwell or disoriented.

"It could [have died from] one of many reasons; it could be an underlying condition, whether that is an illness, or it could simply be that the whale has become old and died," he said.

"We do have some concerns that... it is out of its natural range at this time of year. So there could be some impact of ocean temperature increases as a result of climate change, which may have impacted this animal becoming disoriented and in a region that it's not familiar with at this time of year."

"The next steps for a whale of this size - DOC will be working with local iwi, there will be a blessing of the whale, and then it ultimately will be buried after hopefully measurements and samples are taken. If it's a remote beach, it may be left open to the elements, or it will be left very close to where it stranded.

"You can imagine a 10 metre whale that weighs probably several tonnes or more it's going to be hard to move very far."

In August 2018 a stranded female humpback was euthanised at the nearby Ripiro Beach slightly north.