A year after being becoming internationally recognised, Stewart Island/Rakiura residents are hopeful their status as Dark Sky Sanctuary can continue to grow. 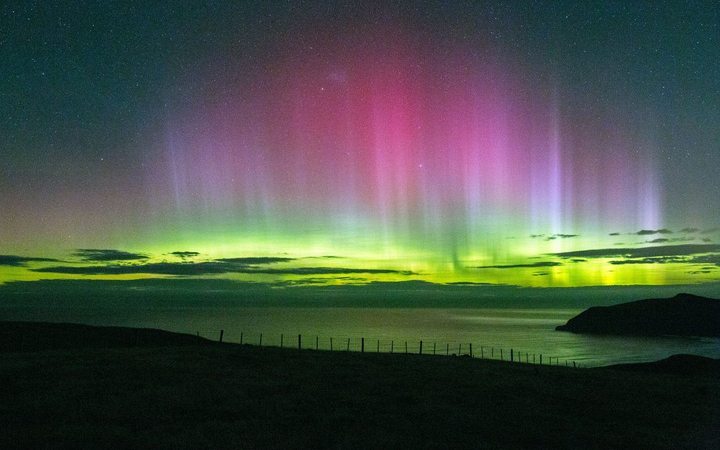 Rakiura - which means glowing skies - was named the world's fifth Dark Sky Sanctuary in January 2019, with hopes it would boost tourism and employment opportunities while protecting the environment.

Local resident Sandra Whipp first discovered her passion for the night sky while photographing another of the island's main attractions - its wildlife.

"I was down on the wharf one night, just as evening was coming on and I was taking photos of penguins coming in and the sky just lit up. And of course, I didn't have the right camera, I knew nothing about night photography. I clicked away and it wasn't until I got home that I realised that I'd taken this aurora," Ms Whipp said.

She has since upgraded her equipment, and is making the most of Rakiura's new title by taking people out to help capture their own dark sky moments.

"Because we're 32 (kilometres) off the coast of Southland, on a clear night there's great amount of stars, you don't get any reflected light from... a city or anything nearby because there just isn't any. So it is just that natural, dark night," Mr Spraggon said.

A bid for sanctuary status was first lodged with the International Dark Sky Association in September 2018 with strong community support.

Jon Spraggon said forward bookings were looking good, but there was still more work to do.

"We've been along with DOC trying to get a viewing platform that's already here that we use for daylight viewing, but getting it upgraded so that it would be an ideal spot for night viewing. But that hasn't been completed yet. There's been a few hold ups, but I think the community definitely has taken it onboard."

Visitor numbers increased by 17 percent from April to September last year compared to the same period in 2018 - its highest increase during winter months since 2013.

Winter is traditionally part of the island's tourism shoulder season, but Young said with the longer nights, the Milky Way overhead and better viewing of the Aurora Australis - the southern lights - that could begin to change.

"In the winter, things slow down a lot and some businesses are even forced to close because of the lower visitor numbers, so an initiative like this which is attracting visitors to the island in the winter is really positive for business and the economy of the island," Young said.

Sanctuary status would help to protect Stewart Island/Rakiura and its night sky for future generations, she said.

"It's such a unique opportunity for something with such a low environmental impact and so complimentary to everything else the island is doing. I think it just adds another strong drawcard for visitors who already are visiting for kiwi and bird life and the other important features of Stewart Island."

While the work isn't over yet, the Stewart Island/Rakiura community is keen to make the most of its dark sky sanctuary status.