Looters have targeted an historic Canterbury pub for the second time since it was gutted by a Christmas day fire. 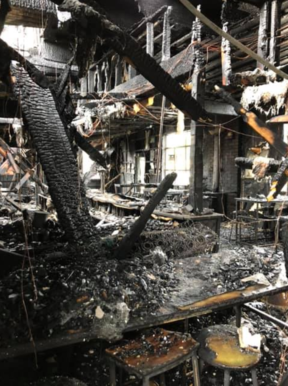 Kirwee Tavern was cordoned off after a fire destroyed the building on Christmas Day in 2019. Photo: Facebook / Kirwee Tavern

Police said alcohol was taken from the Kirwee Tavern some time between Boxing Day and 27 December, and money from the tills on Tuesday this week.

The building is cordoned off after a blaze, which 60 firefighters fought, destroyed the site and left it unsafe to re-enter.

In a post on Facebook, the pub's owner Steve Evans said the thefts were the lowest of all lows.

He said the alcohol taken was worth at least $8000, and they were unable to retrieve money in the tills because the building was deemed unsafe to enter.

A supported beam had also collapsed over night inside, he said.