By Adam Burns for the Otago Daily Times

A peeved Clyde resident, in Central Otago, who has been parking a digger in the town's main street in protest has not ruled out continuing his revolt. 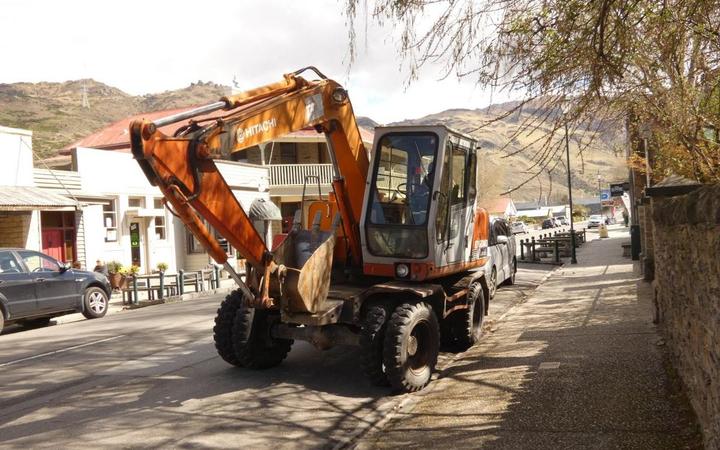 Some community leaders believe the man's efforts are pointless and becoming a blight on the town.

An excavator has been intermittently parked in Clyde's Sunderland Street for the past few months.

Clyde resident Ray Harvey confirmed he owned the digger, which had since been moved.

Recent speculation among residents on social media indicated the protest was in response to the sale of the Dunstan Hotel pub last year.

Harvey said the sale of the historic site was part of the reason the digger was being parked there.

"'I just wanted to get my point across that I don't like what has been done."

When asked if he would continue to park in the spot, he said he "could do".

Vincent Community Board deputy chair Russell Garbutt said the main street had become an "eyesore" in a post on a Facebook community page which caused debate among residents.

Board chair Martin McPherson said it was a futile exercise.

"The hotel has been sold ... a lot of water has gone under the bridge.

"All it's doing is creating issues for the streetscape."

Central Otago District Council infrastructure services executive manager Julie Muir said there was no wrongdoing around where the vehicle was parked when the ODT made initial inquiries in October.

"There is no car parking bylaw which restricts parking in this area."

Oliver's Restaurant and Lodge owner David Ritchie did not wish to comment on the matter, but confirmed his business had not been affected.

The Dunstan Hotel's accommodation site was sold to Ritchie in May 2019.

The adjacent pub was bought by Timeless Land Investments Ltd.

- This story first appeared on the Otago Daily Times website