A tanker has arrived in Kawerau to provide residents with water after an E coli scare. 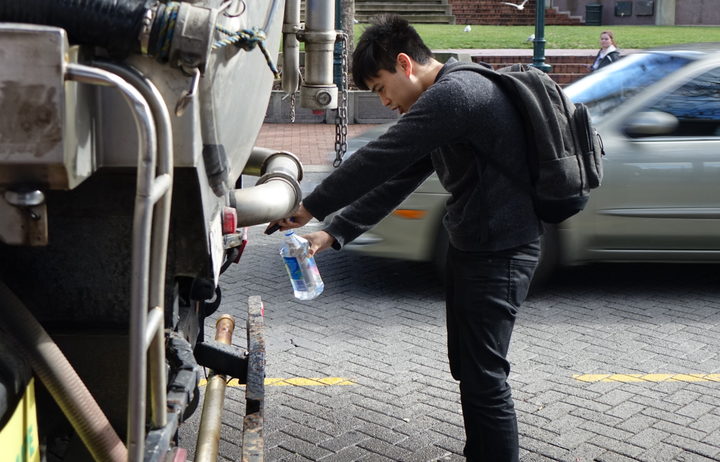 A routine water test returned a "very high" reading for E coli on Saturday, prompting a boil water notice to be issued that afternoon. However, two subsequent tests have come back negative.

Kawerau District Council communications manager Tania Humberstone said if the results of the third test, due today, also came back negative the town's water would be safe to consume.

In the meantime, the council is advising residents to continue boiling their water.

The notice has angered Kawerau residents, who are fed up with what feels like constant issues with the town's water supply.

Burrell said he knew many people who had fallen sick after drinking the contaminated water, including himself.

"It comes straight back to infrastructure, our pipes are antiquated," Burrell said.

"Our pipes are asbestos which have superseded to PVC. They've replaced a third of the pipes but have now stalled. They just don't want to spend the money.

Burrell said residents were disappointed with the council's "late" response to the test result and the water tanker was "too little too late".

"There wasn't enough information rolled out immediately; there are eight councillors and not one of them has fronted the public which is disappointing," he said.

"They should have delivered bottled water to all our kaumātua and all our elderly in town, who can't drive, can't walk into town and don't have access to the internet."

Burrell said if the council had replaced all its pipes with PVC there would be no need for it to chlorinate the water to prevent e-coli, which most residents opposed.

"They made the decision without asking us, they said we're going to put a harmful chemical in your water and there is nothing you can do about it."

The chlorination of the water dislodged bacterial build-up in the pipes, which caused the town's water supply to turn a murky brown yellow colour.

Burrell said the e-coli scare had just added to these ongoing issues.

Saturday's test result came from a sample taken two days before, on 2 January.

Kawerau District Council spokesperson Tania Humberstone said it took 24 hours to grow a sample to be tested but that didn't occur until 3 January as 2 January was a public holiday. The sample showed e-coli present at 200cfu/100ml; recreational swimming levels allow for e-coli to be at 100cfu/100ml.

She said the test was something of an anomaly as it was "very high" yet tests on the days either side of the result showed e-coli levels at 0cfu/100ml.

"Possible causes could potentially be some back-flow contamination from a near-by property, some sample contamination, but we do know it's not in the reservoir because it only came from one sample point," Humberstone said.

"There was adequate chlorination which also points to it being an anomaly."

There has been some criticism of the council's speed in getting the water boil notice out to residents, but Humberstone said normal practice in this situation was that a water boil notice would usually not be issued until there had been consecutive readings.

"That decision was made with the medical officer of health, but there was some time in that process," she said.

"We can put our hands up and say that there are some things that we can do better, there's always room for improvement. It is difficult, not everyone has a phone, not everyone has internet and that's why we turned to the radio.

"We have also been pushing to be a good Kiwi neighbour, and speak to your neighbours, ring your friends and we did see that happening."

Following the water boil announcement, Kawerau New World ran out of bottled water and had to bring in extra supplies from Whakatāne New World.

"We truly understand that this is hard for people, it's a busy time of year for people and to boil it and have enough, we know that it is hard," Humberstone said.

The council will provide a formal report to the Bay of Plenty District Health Board by Friday and staff are continuing to investigate the cause of the positive reading.

Council chief executive Russell George said the water boil notice could only be lifted by the medical officer of health and the Ministry of Health who the council would be in touch with following today's test result.

"We advise residents to continue to bring boiling water to a rolling boil for at least one minute," said George.

"This water can then be cooled and used for drinking, teeth cleaning and for washing vegetables, fruit and salad that may be eaten raw."

The water tanker brought in by council will be parked in the Kawerau New World carpark today for people to fill up containers.

Kawerau District Council is already completing major upgrades to the water infrastructure and has committed major funds in the coming years.

Russell George said the water boiling restriction notice put into place on Saturday had prompted questions about whether the Kawerau council had invested enough in the infrastructure.

This is the first of several projects identified by the council as priorities.

The next project will be a $1.2 million upgrade of the feeding lines into the water reservoirs which will be carried out as part of the 2019-20 annual plan.

A wider scope of this project will see the council invest a further $15 million into replacing the old water reticulation system over the next five years.

George said the council had already committed to the replacement programme of the pipes.

"Kawerau is a small district and we are mindful that we need to take a prudent and careful approach for this scope of work which will require between $2 million and $3 million to be invested every year for the next five years," he said.

"We are developing this work plan which will include the replacement of the oldest reservoir.

"As a town developed in the 1950s, we know that there are some areas of infrastructure that are ageing, however, inspections of the reticulation system showed overall it is still in good repair."