The Ministry of Foreign Affairs is strongly advising New Zealanders travelling in Iraq to leave, as tension between its neighbour, Iran, and the United States continues to escalate. 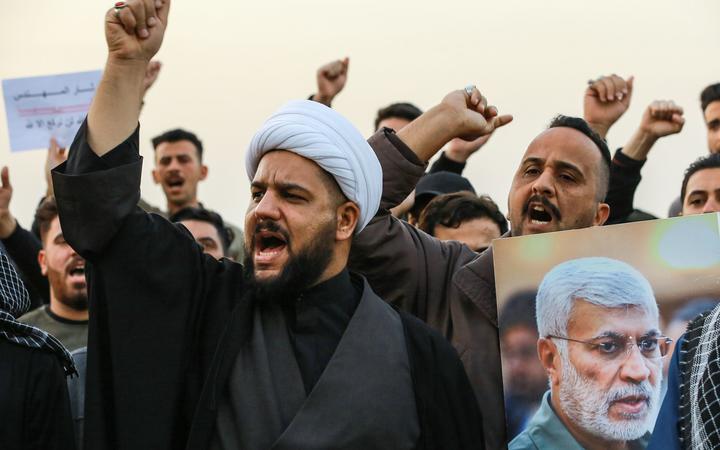 Supporters of the Shia Muslim Popular Mobilisation Forces in Baghdad shout slogans during an anti-US protest after the US airstrike that killed Qassem Soleimani. Photo: AFP

On the SafeTravel website there are 15 New Zealanders registered as travelling in Iraq, and 18 in Iran, where tensions have flared after the United States, acting under the orders of President Donald Trump, killed top Iranian military commander Qassem Soleimani.

MFAT says Iraq is volatile and an unpredictable security situation, with an ongoing threat of terrorism, violent extremism and organised crime.

Those with safety concerns are strongly advised to leave.

Iran has threatened retaliation against the US for the killing and there are fears for the safety of around 45 New Zealand troops who are operating in a non-combat training role at Taji Military Complex in Iraq as part of a US-led coalition to wipe out the threat from the Islamic State.

Professor of International Relations at Waikato University Alexander Gillespie said Iran will want to avoid direct conflict with the US, because it would lose, however, other options include stirring up trouble in its unstable neighbour, Iraq.

There have been emotional rallies attended by thousands of people in both Baghdad and Tehran calling for retaliation on the US for Soleimani's assassination.

In the weeks before Soleimani's death, there was widespread civil unrest against the government with estimates that at least 400 people were killed.

The New Zealand government is keeping a watchful eye on Iraq but has not yet commented on whether it'll pull the last remaining troops out of the country. They are due to return home in June.