Two British cyclists are somewhere on a New Zealand road, trying to set a world record for being the fastest women to cycle around the globe on a tandem bike. 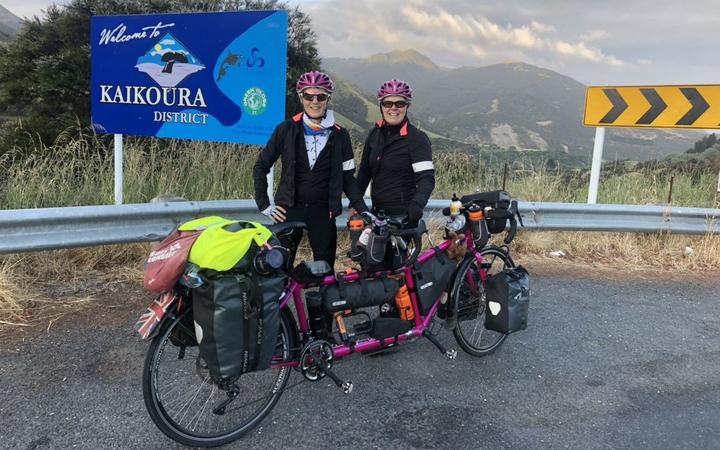 Catherine Dixon and Rachael Marsden began their trip in the English city of Oxford on 29 June and have since cycled thousands of miles through Europe, Turkey, United States, India, and Australia.

The pair are hoping to beat the men's record for completing the journey and to raise money for Oxfam and the Motor Neurone Disease Association charities.

The pair pulled over just south of Auckland to tell Summer Report what motivated them to begin their epic cycle.

"We talked about it and we thought, 'why not go for the world record'. So, here we are in New Zealand, kind of on the route to around the world," Dixon said.

Dixon gave up her day job to embark on the journey, while Marsden was on a year-long sabbatical from her job.

"We cycled from Oxford in the UK, across Europe. So France, to Italy, down the Croatian coast, Montenegro, Albania, Macedonia, Greece, Turkey, then into Georgia," she said.

"Then we got a flight to India and cycled around the coast of India, from Mumbai to Calcutta. Then we went to Mandalay and cycled down to Singapore.

"Then we got a flight to Perth and cycled across Australia. So from Perth to Brisbane. And then from Brisbane we came to Queenstown and we've been cycling through the South Island to the North Island. We're just about to get to Auckland."

Marsden said she committed to the cycling trip because she didn't want to regret not using the opportunity she had to do it.

"It's one of those things that you never want to say 'if only I did that'. You just want to do it, so I'm just doing it really."

Marsden said the record had been achieved twice before by two sets of male riders, in 2016 in 290 days, and then more recently, completed in 281 days.

She said they wanted to be the first women to complete the journey and in better time.

"Four men have done it, no women. But Cat and I are hoping that the women's record will be faster than 281 days."

Marsden said the pair had hoped to complete the journey in 280 days, but they'd completed their tour of New Zealand faster than expected, so there was a possibility of completing the journey a week shorter than that original target.

"So long as we stay well and accident-free," she said.

Apart from minor accidents, the pair had come through the journey unscathed and they were hoping that would remain the case.