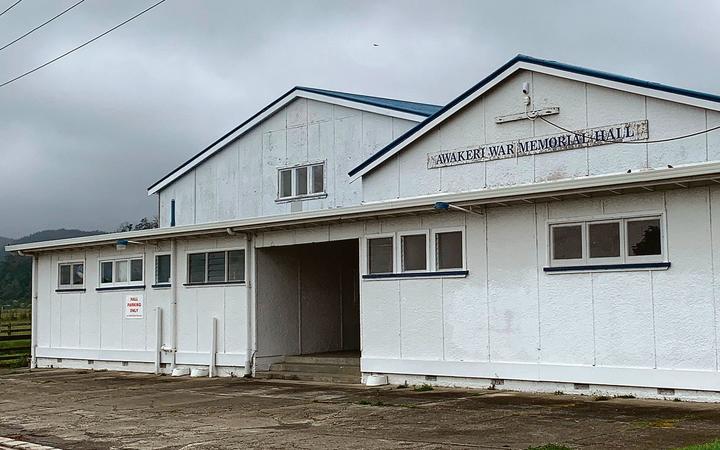 The future of the Awakeri War Memorial Hall had been uncertain, but new owner Tyron Erasmus has confirmed it will remain a community asset. Photo: CHARLOTTE JONES / LDR

Since its sale by the Whakatāne District Council to developer Barry Caulfield, the future of the hall has been uncertain, but its latest owner has promised it will remain a community asset.

Tyron Erasmus, owner of local business Watt Electrical, is now the owner of the hall and said he has plans to do the hall up and keep it with the community it was built for.

"There is too much history here to lose," Erasmus said.

"Since I bought it, I have been approached by many people who have photographs of themselves as children inside the hall, which is very special and shows how important it is to the community. It will remain a community hall."

The hall first came to Erasmus' attention when his daughter began dance classes there and, while he had no plans to purchase a hall, he said he couldn't pass it up.

Since buying the hall in September, Erasmus has been working hard to bring it back up to standard.

He said it had been neglected for a long time and there was a lot of work to do.

"The roof is extremely leaky and that needs to be replaced to keep the history inside safe. There is work to be done on the kitchen and it just needs to be done up," said Erasmus.

"There have been a lot of rumours going around that I am going to convert the hall into a factory or a depot for my business, but that is not the case. I am working on doing the hall up and it will definitely stay a community hall."

Parts of the hall already have fresh paint, new wiring and LED lighting. Erasmus has also already replaced many chattels, such as the chairs.

He said he had plans to turn the room adjacent to the kitchen into a dance room with mirrored walls as well as replacing the front doors and improving the façade to make it more welcoming. He said he would like to put electrical cables connected to the hall underground. However, first he needed to cover the basic maintenance of the hall.

"We have enjoyed hearing the history of the hall from people who have been using it their whole lives and would like to create a photo montage wall of the hall throughout its history," Erasmus said.

"If anyone has any photos of the hall, or themselves or family at the hall we would love to see them."

Erasmus said he would like to see the Roll of Honour kept with the hall "where it belongs" but the council had confirmed it will be moving it.

"However, everything else you see here will be staying here.

The council sold the hall in late 2017 to Caulfield, which prompted a public outcry and accusations of a "fire sale".

Caulfield bought the hall for $135,000 - which was $65,000 less than its valuation - after telling the council of his plans to turn the hall and adjacent farm into a multimillion-dollar tourist venture which he said would feature a petting zoo, zip lines and a truck museum.

Several community members said at the time they had approached the council with higher offers after hearing of the sale but were rejected.

At the time of the sale, Andrew Iles - now deputy mayor - was the only councillor to oppose it.

It is understood that Caulfield sold the hall and farm to businessman Sam Jones, who then offered the hall back to the council before selling it to Erasmus in September for $285,000 - $150,000 more than the council originally sold the hall for.

As Caulfield sold the hall and farm together, it is not known how much profit, if any, he made from the sale of the hall.

Council community services general manager Mike Naude confirmed the council had declined to buy the hall back but would not disclose the potential figures involved.

"The council took into consideration a number of issues when deciding the future of the hall, particularly the likely costs and limitations of retaining it as a community-owned asset and the potential benefits to the community of proposed development by the private sector," said Naude.

"The council's preference was that the hall's new owners would develop the property for the benefit of the local community and allow continued community use of the hall."

After the hall was sold to Caulfield, many in the community were concerned about what would happen to the Roll of Honour board, Naude said it would be "returned to the community in the future".

The Awakeri Scouts were also told they would need to move from their den adjacent to the hall following the first sale of the hall to Caulfield and Naude confirmed they would still be moving following this sale.

"The council will engage with members of the Awakeri community on the final location of the Roll of Honour board and an appropriate memorial prior to the relocation of the scouts," said Naude.