A pair of trampers thought they had stumbled on to a movie set when they came across a handcuffed man who had been arrested after a manhunt in Alexandra. 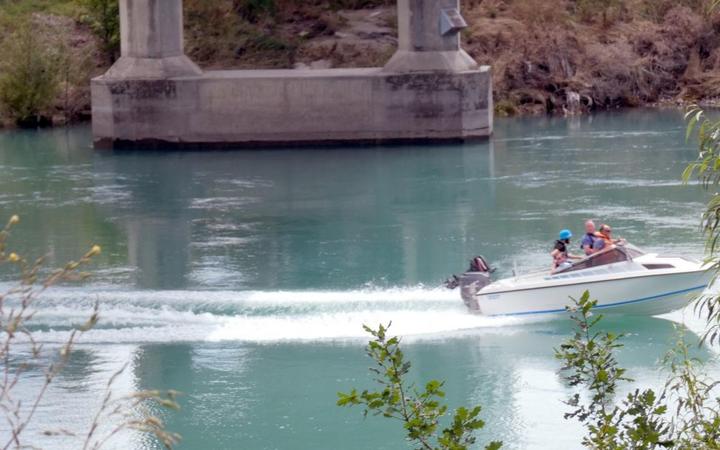 Police commandeered a boat from the Alexandra boat ramp to search for a man who jumped into the Clutha River to evade arrest. Photo: Otago Daily Times / SIMON HENDERSON

Witnesses described how a man jumped into the Clutha River to evade arrest after leading police on a car chase before crashing into a truck about 12pm yesterday.

The pursuit began in Roxburgh at 11.45am, when the man was spotted driving erratically in Scotland Street and failed to stop for police.

The man then crashed into a truck, before abandoning the car and running away.

He was seen sprinting towards the Clutha, and a witness reported seeing him jump into the river.

The river, which is the swiftest in New Zealand, was in flood.

The man was located and arrested a short time later.

The two trampers were walking down a gully near the river, when they saw a police officer with a man who was handcuffed.

They thought they had stumbled on to a movie set, they told the Otago Daily Times.

They realised it was something more serious when they were directed away from the area by police.

Old Bridge Road resident Jill Spencer was at the front of her property when she saw a young man run past with two police in pursuit.

The man ran down a private driveway at the end of Old Bridge Road.

Her next-door neighbour, who did not want to be named, said he saw the man get tasered, but he kept running.

Russell Butt, who lives at the end of Old Bridge Road, said he saw a man run down his driveway, leap through the beehives in his backyard and then jump over a bank.

One policeman followed him over the bank, while the second ran back up the road, Butt said.

State Highway 8 was closed for a time because of the crash, and reopened at 2.45pm.

Police confirmed the Independent Police Conduct Authority would be notified of the incident.

A St John spokesperson said the man was assessed by ambulance staff and did not need to be transported elsewhere.

No injuries were reported as a result of the crash with the truck.