Alexandra is shaping up as the place to be to usher in 2020, with other South Island centres also set for warm temperatures. 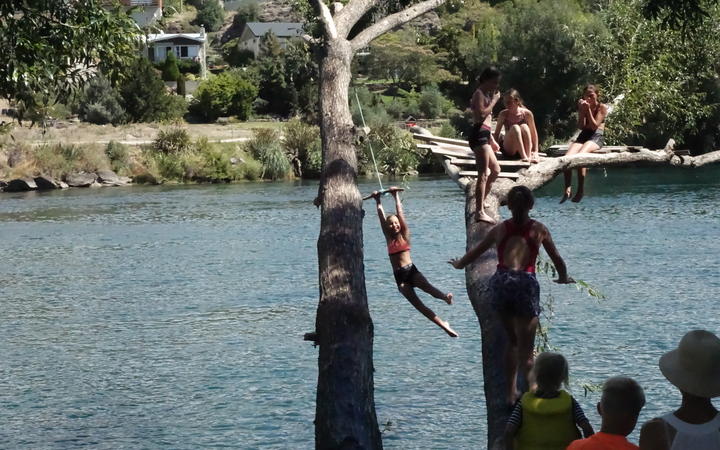 People in Alexandra may need to cool off with a swim with a forecast high of 32 C for New Year's Eve. Photo: RNZ / Ian Telfer

MetService forecaster Tui McInnes told The Weekend that he is expecting warm weather over much of the country for New Year's Eve celebrations.

He said temperatures would be especially mild around Central Otago with 32 degrees C forecast for Alexandra.

New Year's Day would stay warm for most of the South Island, with temperatures heading into the 30s in Blenheim and Ashburton.

"This is a case where we've been lucky enough to have a ridge sitting over the country bringing again mostly fine conditions."

However, a front will also sit around providing some wind for Wellington and delivering rain in Fiordland and further along the West Coast.

"Outside of that, it's actually looking quite nice."

Sarai not expected to strengthen

McInnes said Tropical Cyclone Sarai, that is currently lashing Fiji, is not expected to get any stronger than a category two storm as it moves east.

He said it was still positioned 120 nautical miles to the south of Viti-Levu, although places like Nadi and Suva will still be experiencing strong to gale winds.

Here's a satellite of Tropical Cyclone Sarai, south of Fiji's Viti Levu island. This shows the water vapour satellite channel, depicting the amount of moisture in the middle of the atmosphere.
Sarai is currently a Category 2, forecast to continue moving eastward.
^Tui pic.twitter.com/mK8fIH2rAN

It would continue to bring 90 to 110km/hr strength winds.

Sarai was a typical storm for this time of year which is the tropical cyclone season, he said.