By Emma Perry of the Otago Daily Times

A former council candidate who stabbed an endangered sea lion on a Dunedin beach is standing by his right to defend himself from "berserk" animals. 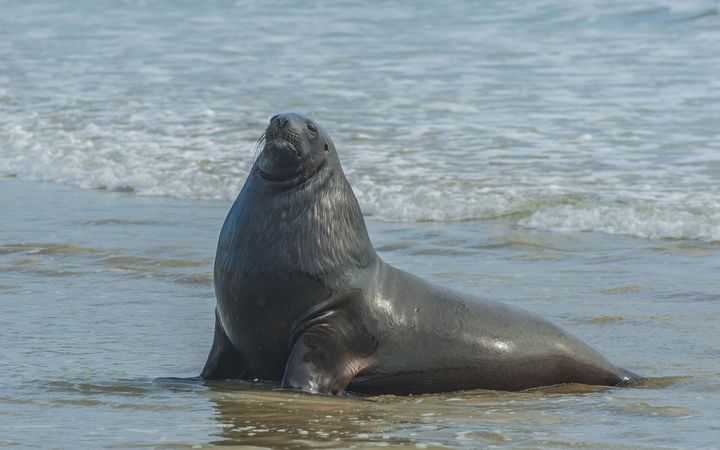 A file shot of a sea lion. A Dunedin couple were tracked for about 30 minutes when returning to shore after a diving trip. Photo: 123rf.com

Dunedin man Matt Kraemer said he was protecting his panicked wife when he stabbed the sea lion with a spear.

He said they were in "great danger" after it had followed them through the water for half an hour yesterday afternoon.

However, former Sea Lion Trust chairman Steve Broni said he doubted they were in any real danger and it was likely the animal was employing a tactic called "bluff charging" - a false charge made by an animal that sees something as a threat.

"Across Dunedin and Otago, nobody has ever been mauled by a New Zealand sea lion.

"I don't think their lives were under threat."

Kraemer, who stood as an Otago Regional Council candidate this year, said: "If a sea lion bit one of us and pulled us under, either of us could have quickly drowned."

He said he was diving for paua with his partner, when two sea lions began to follow and circle the pair.

"We were about 30 minutes from getting back to the beach, when two sea lions started to follow us.

"The larger of the two bothered us all the way back - it kept zooming past us and trying to scare us."

Kraemer said on the 1.5km swim back to the shore they were followed by the two sea lions for about 30 minutes.

"My partner had a dive knife, which she was keeping between her and the animal.

"It was biting at the long diving fins we have on our feet and the entire time it was making passes at us."

He said the pair got to the beach and the sea lion continued to follow them.

Fears partner would be bitten

He said his partner was panicking as the sea lion was less than a metre from her body.

"We couldn't run away because we still had the fins on our feet."

Kraemer said he used a spear, part of his speargun - which he always carried while out diving for protection against great white sharks - to poke the sea lion.

"We got to the beach and I thought it would leave us but then it climbed up on to the beach. She was really panicking because it got on its front paws and was less than a metre from her body.

"I thought this thing is going to actually bite, so I went over with the spear and gave it a poke and it went away.

Kraemer said he thought the cut was about 3cm deep.

"I broke the skin and I'm sure I got into his fat but I know I didn't go very deep - about 3cm.

"Without poking it, it wasn't going to go away."

Kraemer said he would be happy to defend his actions.

"I am happy to champion the right to defend oneself and others from berserk animals, even if it is unlawful."

Broni said people in the water should refrain from fending off sea lions as their intention was not to attack.

"Wherever possible don't engage with them - retreat as quickly as you can.

"Stay 10m away and definitely 20m away if they're active."