Hundreds of people are taking shelter in evacuation centres in Fiji as cyclone Sarai hammers the country. 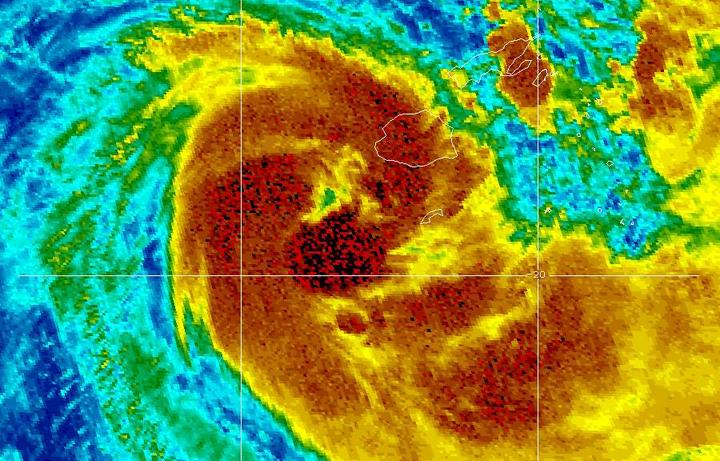 Visible infra-red satellite imagery of Cyclone Sarai as it churns down the west coast of Fiji. Photo: Fiji Metservice

The category two event is bringing wind speeds of around 100km/h, gusting up to 140km/h.

The storm is expected to pass close to the Kadavu island group today, and a flood warning has been issued for major rivers and streams in the western and central division.

Travel agency Flight Centre said hundreds of its customers had been affected by flight cancellations as Fiji braced itself for the storm.

A number of flights between Nadi and New Zealand were cancelled yesterday and more flights have been cancelled again today.

All flights in and out of Nadi have been cancelled, including from Auckland, until at least midnight tonight.

Flight Centre New Zealand general manager of product Victoria Courtney said the agency was working with airlines to re-accommodate passengers within the next week where possible.

Courtney said passengers should check with airlines or travel agents for the latest updates.

The body also assisted people living in low-lying areas as strong storm surges started to enter some villages along the coastal areas in the western division.

The cyclone's forecast track shows it will pass adjacent to the main island Viti Levu and then across Fiji's southern islands, before heading towards Tonga's Ha'apai Group.

The Cyclone Warning Centre will continue to provide Tropical Cyclone advisories, alerts and warnings for Tonga on the developments of the cyclone every six hours. Advisories will be updated more often prior to its track closing into Tongan waters.