A leading academic has criticised the Race Relations Commissioner for defending the use of Dutch Christmas character Black Pete. 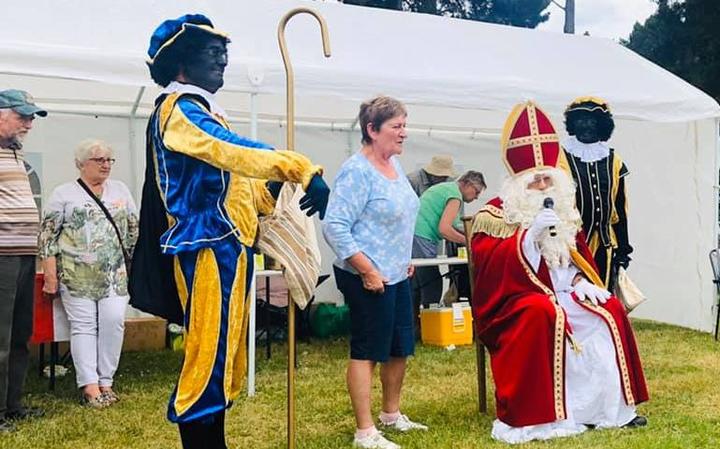 The character Black Pete, or Zwarte Piete, from Dutch literature is a companion to Saint Nicholas or Sinterklaas. Photo: Netherlands Society of Christchurch / Facebook

Donning black face paint with an afro wig and colourful medieval attire, Black Pete is a Dutch Christmas tradition spanning back more than a century.

Black Pete, or Zwarte Piete, first appeared in Dutch literature in 1850 as a companion of Saint Nicholas, Sinterklaas, and is traditionally black because he is a Moor from Spain.

In recent years however its use of black-face has copped heavy criticism, even from its country of origin.

The character appeared this month at the St Nicholas Day celebrations in Christchurch run by the city's Netherlands Society.

"I think this is the issue, that it's using people who are themselves not from the area," Professor Spoonley said.

"It's blacking their faces, it's giving them earrings and lipstick, and it it harks back to something which really now is quite offensive particularly in a country like New Zealand or the Netherlands which are very multicultural countries."

Race Relations Commissioner Meng Foon however said he did not have an issue with it.

"Well, whether it's appropriate or not, it is part of their culture it's centuries old, this celebration of St Nicholas. Obviously, it's nothing to do with what people perceive it to be - black people in slavery," he said.

"Black Pete is part of the generosity of singing, jovialness, gifting and so it's all part of the Dutch culture which is great that they are celebrating the event."

"I think that what you should be doing is talking to the people who are doing this, and why it is offensive. And by the way, in the Netherlands many of the portrayals of Black Pete have been changed significantly so that you don't have that black face," he said.

The Netherlands Society in Christchurch which put on Black Pete did not respond to RNZ requests for comment, but previously defended its use.