The head of a delegation from Nepal's earthquake recovery body says his country has struggled to balance the desire to preserve heritage sites while making them earthquake safe. 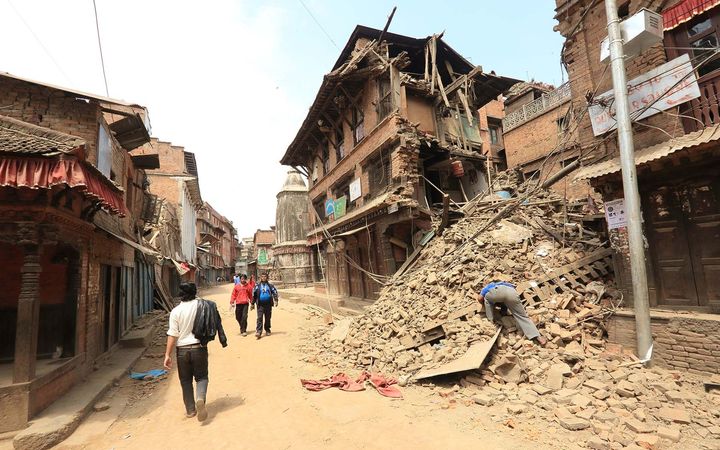 Damaged buildings in the wake of the 2015 earthquake that struck Nepal. Photo: CC BY 2.0 / United Nations Development Programme

Dr Chandra Shrestha, from Nepal's National Reconstruction Authority, is leading a delegation who have been in New Zealand learning about the country's earthquake recovery.

In 2015 Nepal was hit by an earthquake which killed almost 9000 people and destroyed or damaged nearly a million homes.

Dr Shrestha said reconstruction of heritage sites had been particularly complicated, with some of the buildings more than 2000 years old.

In a statement, he said the depth and breadth of knowledge shared by New Zealand officials would be invaluable for Nepal.

Dr Shrestha said Nepal faced very similar challenges as New Zealand, but that New Zealand was able to respond well because it had effective and well-funded government structures in place.

"New Zealanders are fortunate to have stronger building regulations and insurance schemes like EQC to get them through a natural disaster, compared to Nepal which relies heavily on overseas support in our recovery.

"After meeting with EQC, the delegation is considering how we can replicate this insurance policy of New Zealand."

Dr Shrestha said reconstruction of heritage sites in his home country had been particularly complicated.

Dr Shrestha said one of the key aspects in New Zealand's recovery he was impressed by was the Earthquake Commissions cover for home owners.

In Nepal only about one to two percent of people have home insurance. He said the government paid out $US3000 to all home owners.

Dr Shrestha said he was aware that there were still issues with some claims unresolved in New Zealand, but he said the service was an interesting one, which he hoped the Nepalese government would look into.

He said in urban areas only about 30 percent of earthquake damaged houses have been rebuilt, with complications over land disputes and interconnected houses.