The mother of a badly-burned bride says she's livid her daughter and son-in-law were able to tour White Island/Whakaari following warnings of increased volcanic activity in recent weeks. 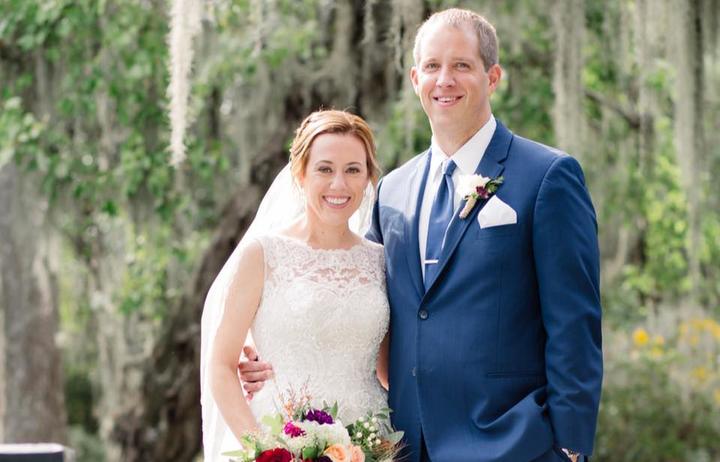 Police this morning said 47 people visited the active volcanic island yesterday, many of them foreign tourists. Five have been are confirmed dead, eight are still missing, 31 are in hospitals around the country and three have been discharged.

News of the eruption reached one family in the United States via a distressing recorded phone message.

Newly-weds Matthew and Lauren Urey, from Richmond in Virginia, had been on a dream honeymoon on board the Royal Caribbean cruise ship Ovation of the Sea, docked at Tauranga when the eruption began. They had signed up for an excursion to the offshore island 50km off Bay of Plenty, through White Island Tours.

Lauren's mother Barbara Barham told The Washington Post she received a phone call from Royal Caribbean shortly after midnight on Monday local time, asking whether she had heard from her daughter as the couple were missing.

Concern turned to horror, when the next phone call came from her son-in-law's mother, who said she'd just received a distressing voice mail from Matthew after the couple had been taken to hospital with severe burns.

Mrs Barham said: "Her son called and said that they had been on the excursion and there had been a volcano eruption and they were burned very bad.

"He said he would try to call as soon as he could, but talking and making phone calls was difficult. His hands were so badly burned, it was hard for him to make a phone call.

"Obviously, I'm panicking. I don't know how to act. I feel like I should be crying, but I can't even cry."

The newspaper reported that a representative from Auckland Hospital later called Mrs Barham as her daughter Lauren was in surgery. She had severe burns on her lower extremities, covering at least 20 percent of her body.

Her husband Matthew was airlifted to a hospital in Christchurch for treatment of burns that covered about 80 percent of his body, Mrs Barham said.

The couple's parents were preparing to fly to New Zealand by the end of the week.

Mrs Barham expressed anger that the tour was given the green light to proceed, after multiple warnings of increased volcanic activity on the island for the past several weeks.

"I'm just livid," she told the newspaper. "There's been warnings about it ... My son-in-law never would have booked the excursion if he knew there was any chance of them being injured."

Lauran, 32, had called her parents before going on the excursion, expressing excitement of the prospect of visiting a live volcanic site.

Monitoring of the island's volcanic unrest was at Level 2 when the explosion happened, described by one GNS scientist as "a throat-clearing kind of eruption".

The volcanic alert level was elevated to level 2 on June 26 for a period, after GNS Science said the volcano had registered historically high levels of sulphur dioxide - the second highest since regular measurements began in 2003. Duty volcanologist Agnes Mazot said at the time there was potential for an eruption.

The alert level was again elevated to level 2 on November 18 after weeks of increased sulphur gas from deep inside the volcano and an increase in tremors.

Families across the world have been waiting anxiously for news of the continuing search-and-rescue efforts on Whakaari/White Island, with hopes of finding survivors in the island all but gone.

Flights over the volcano by police, military, and rescue planes this morning have found no sign of life as emergency services shift their focus to recovery and identification of bodies.

Prime Minister Jacinda Ardern said at a news conference in Whakatane this morning that New Zealanders, as well as visitors from the United States, Australia, Britain, China and Malaysia were among the missing and injured.

"To those who have lost or are missing family and friends, we share in your unfathomable grief in this moment at time and in your sorrow," she said.

Australian Prime Minister Scott Morrison said three Australians were feared to be among the confirmed fatalities, with 13 among the injured.

The first victim to be name was Hayden Marshall-Inman, who had worked as a tour guide for White Island Tours for several years.

White Island experienced an eruption back in April 2016.

In August 2017 a Memorandum of Understanding was signed by then Associate Minister of Local Government, Jacqui Dean, and the Bay of Plenty Civil Defence Emergency Management Group. It set out the direction and responsibilities of the group in relation to the active volcano, including readiness and response work.

Whakaari/White Island, as an offshore island, does not come under the authority of any city or district council, which usually have these responsibilities under the Civil Defence Emergency Management Act.

Greg Brownless, who was Tauranga Mayor and BOPCDEM Group Joint Committee chairperson, said after the MOU was signed that the group would continue to work with those who visited the island to ensure readiness and response planning was adequate for the risks the island posed.

Internal Affairs Minister Tracey Martin said this morning it was too early to consider what form any inquiry into the White Island eruption could take, but suggested wouldn't be another Royal Commission of Inquiry.