The Timaru District Council has extended its evacuation area around the Rangitata river and is urging people to leave before it is too late. 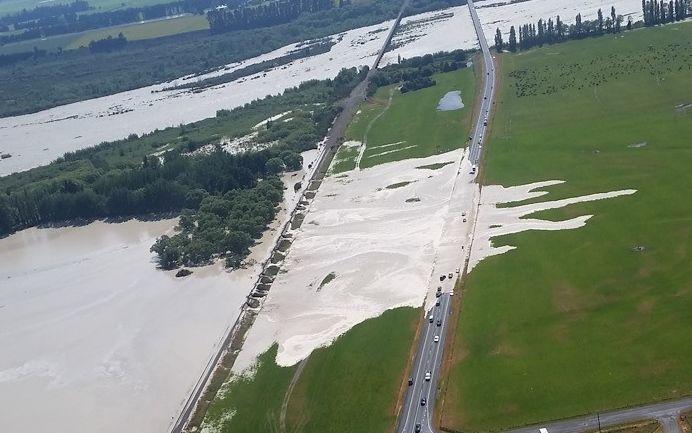 More properties in South Canterbury have been evacuated today, bringing the total to 115, as flood water levels have been slow to drop.

Heavy rain battered the region over the weekend, causing the Rangitata River to breach its banks and flood nearby properties.

A civil defence centre has been set up in Temuka for those forced to leave their homes.

Earlier today, the council advised people living around the south branch of the Rangitata river to evacuate as water levels continue to rise.

The evacuation area now extends around the Rangitata cafe.

Timaru District entered a state of emergency over the weekend, when torrential rain caused the Rangitata River to overflow and cut off access to the region.

Subsequently, Rangitata Bridge on SH1 and the bridge at Arundel had to be shut, but Inland Scenic Route 72 reopened yesterday.

A spokesperson says staff have had reports that water levels are still rising, particularly in the Rangitata South Branch, and they may continue to do so for some time.

An existing evacuation notice is still in place and the council says if anyone has returned to their property, they should leave as there is a significant risk of being cut off.

Anyone in the extended evacuation area is being urged to leave, people should not wait, even if their house was given clearance by the response team yesterday.

The council said power was likely to be cut off intermittently.

A council spokesperson says people may have returned to their farms but they may be cut off if they do not evacuate and areas previously not affected by the flooding may be affected today.

More than 350 millimetres fell on the upper catchment over the weekend.

Rangitata South Reserve camping ground manager Glen Shaw told Stuff there had been a bit of flooding on the roads leading into the huts, but so far the huts had been unaffected.

"We're waiting to hear from the council about the next plan of action," Shaw said. "I understand the waters are rising."

Federated Farmers South Canterbury president Jason Grant said the situation for flood affected farmers in the area had not improved much.

Mr Grant said about 16 large scale farms, and about 50 families, had been affected by the flooding and some farmhouses have been yellow stickered.

"What the river has done is its cut itself out into where it has breached and that's where it's preferring to go. So the floodwaters that will be going down to the farmland, 300-odd cubic [metres], haven't received it at all.

"Environment Canterbury are out there at the moment trying to work on how they can redirect the river back into where it's supposed to be, that's going to take some time."

He said another worry was the availability of fresh water for cattle where stock water lines have been cut.

Meanwhile on the West Coast, a convoy of hundreds of vehicles is preparing to leave Franz Josef at 2pm when the road south opens to one way traffic.

About 1000 tourists were stranded when wild weather at the weekend caused slips and wash outs to the highway north and south of the town.

They were expecting to have to wait until Friday, but road crews have now managed to clear a way through.

Lizzie Chitty doesn't have a car, and will travel on one of the buses being provided to travellers.

She looks forward to continuing her travels but says Franz Josef is not a bad place to be stuck for three days.

Civil Defence says the route south is initially only for people leaving the region, but essential supplies such as feed for stock and milk tankers will be allowed in.

Tonnes of driftwood swept on to Queenstown shores

The council says the levels of Lake Wānaka and Lake Wakatipu have fallen, but further rain is expected later this week.

The council is advising lakefront business owners to consider delaying clearing away sandbags until the latest weather forecasts are assessed tomorrow morning.

Lakefront carparks will remain closed until debris is cleared.

Tracks and trails throughout the district also remain closed while any washouts and risks are assessed.