Twelve people and a dog had to be rescued from a Lower Hutt campsite this morning after a stream flooded.

Fire officers and police arrived at the Hebden Crescent site in Belmont after 7am and told the campers they had to leave. 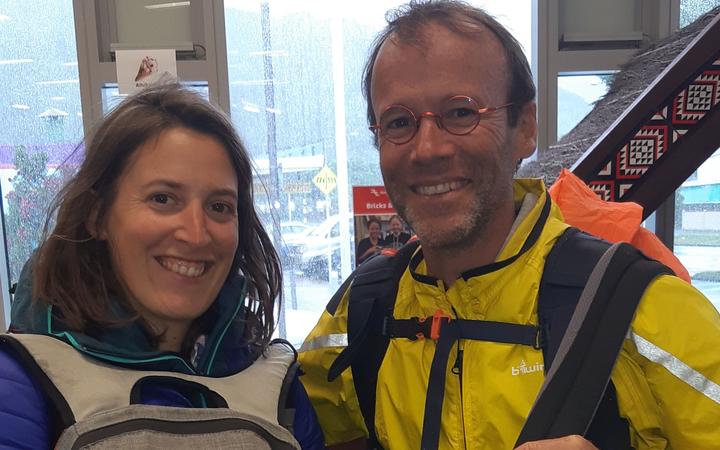 They decided to spend a night in a campground before catching the inter-island ferry, and slept in their car, unaware they were trapped by the rising waters.

Mr Schweitzer said they were woken by a fireman who told them to grab essential items, leave their car and put on a life-jacket, to cross the stream which was waist-deep.

"It was quite cold and it's impressive when you have to cling to the fire workers with a rope and they give you life vests and you have to cross a river with your clothes and knowing that you don't have any other clothes. You have to cross it and you're completely wet then," Mr Schweitzer said.

"At the other side the police were waiting. The police officers took what we had with us in their car and they brought us to the community centre."

The group were taken to the Walter Nash centre where they got a shower, food, and dry clothes. Staff are also arranging accommodation for tonight.

Mr Schweitzer said he's amazed by the hospitality and help they've received. He said New Zealand was a wonderful country and the rescue was an "incredible experience."

A Hutt City Council manager, Geoff Stewart, said the road to the camp has been washed out.

"The stream is called Dry Creek and it wasn't dry by the time they got up in the morning. In fact it was flowing quite deeply, through that area. We've been up and had a look and they definitely can't get their cars out at the moment," he said.

Mr Stewart said most of the campers were foreign tourists in campervans or cars.

Mr Schweitzer said he didn't know when, or even if, he would get his rental car back, although it is insured.