Several tourists are stranded at a campground in Whataroa, including some "terrified" freedom campers who narrowly escaped a rapidly rising river. 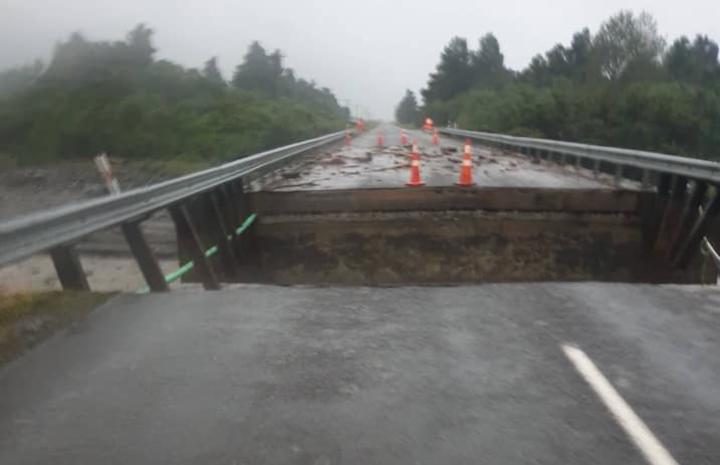 The small south Westland township on the western bank of the Whataroa River was now cut off by slips and washouts on all roads leading in and out.

Check out RNZ's coverage of the weather today for more updates.

The Transport Agency said it would be several days before access was cleared.

The owner of the backpacker hostel and campground, Madeleine Dennehy, spoke to RNZ on the phone from Whataroa, while very loud thunder rolled in the background.

She said a touring cyclist and some freedom campers were now sheltering from the storm at her hostel.

"They were pretty shook when they came here at 4am. They'd started waking each other up and saying they'd better move as the back tyres of one of them (vehicles) was in the river, basically.

"They told me they'd parked up right above the [Whataroa] river where they were meant to have parked."

She said five campervans had arrived at the backpacker hostel, and she was concerned if others might have been stranded.

"It happened two nights previously that someone had to be towed out at 2am.

"There are flooding signs there but people don't understand what happens to our rivers here, that they just go nuts."

Ms Dennehy said she had tried heading to the river two nights ago to check, but the thunder and lightning was so bad and the rain so heavy, she could not get out of her driveway.

"Everyone got up to milk yesterday but there was no power, but everyone still has to milk the cows, but now the tankers can't get through."

She said currently the hostel was not in any immediate danger, but water did go through the back of the building and shifted an empty freezer.

The downpours last night were not as severe as the night before, she said, and the 1kg Milo tin she used to collect rain leaking through the ceiling had not filled up today, as it had last night.

"I did have to upgrade it, from a smaller tin I had there."

Ms Dennehy was running low on some essential supplies, and regretted not stocking up on potatoes as she had planned last week.

"We've got a lot of food in the freezer so we're good there but toilet paper supplies are running low."

Further east, where a state of emergency remained in place in the Timaru district, mother of two Alana Cronin was evacuated late yesterday with her two young children, and said they did not expect to be home any time soon.

State Highway One in South Canterbury was still closed at the Rangitata River - both bridges over the river have been closed since yesterday morning because of floodwater covering the approaches.

Ms Cronin said the family had only recently moved to the area, where her husband was a dairy farmer. They received an alert yesterday afternoon to leave, but by then their property on Rangitata Island Road was surrounded by water.

She said they were flown out by a private helicopter.

Ms Cronin said they had a two-and-a-half year-old and an 18 month-old so she was prepared ahead.

"It's hard being thrown out of a routine and our youngest has epilepsy as well as we have to keep a close eye on her and we had to have all her medication ready to take with us.

"We were pretty certain the water wasn't going to come to the houses but you just don't know with water because it's so dangerous."

Ms Cronin said she had heard today their property was safe, but was unsure about the family cat she hoped had made it to high ground.

"We had to leave her behind but she'd be able to get on to the roof if the water came up too far.

"We've been okay - our boss got choppered back in this morning to milk his cows.

"There hasn't been a lot of damage to our place so we're lucky really, compared to others but judging by the roads we won't be getting home any time soon."

Ms Cronin said they were now staying at a friend's house in Geraldine.

Kirsty Evans, who manages the South Canterbury hotel, Stay Timaru, said all accommodation is fully booked, flights out of Timaru are full and people are bedding down wherever they can.

She said the weather is fine, but heavy rain in the mountains has swelled rivers to extremes.