An American hiker rescued from the banks of a flooded river in Tasman says he was seconds away from being swept to certain death. 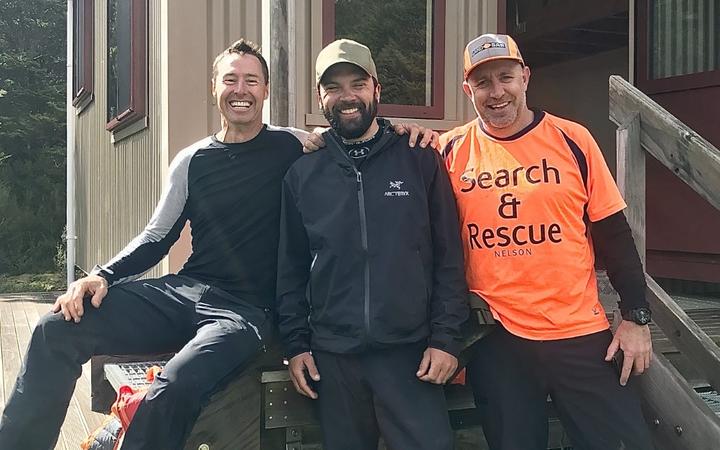 US hiker Chris Muse, centre, with LandSAR volunteers Dwayne Lohmann, left, and Kris Monopoli, right, who rescued him after he was swept down a flooded tributary near the Motueka River. Photo: Supplied

Chris Muse, an outdoor guide from Alaska, was swept about 70m downstream after attempting to cross a tributary of the Motueka River, on Tuesday morning.

The region was among many parts of the country hit by heavy rain this week.

The 30-year-old was hiking the South Island section of the Te Araroa Trail, from Ship Cove in the Marlborough Sounds to Bluff.

Speaking from St Arnaud where he was recovering, he said he had already made several successful river crossings but misjudged this one entirely.

"The flow was so ... so high that a boulder was set loose in front of me and pushed me back. I lost my footing and luckily I landed on my front so I was able to execute a few solid swim strokes, and at the flow rate it swept me probably 50 to 70 metres downriver to the opposite side of the stream I was on.

"I was able to cling to a boulder just before going into the Motueka (River), which would have ended in ... in certain death."

He managed to clamber to safety but then found himself stuck between two impassable rivers.

Police said he activated his personal locator beacon, which sent a message to his local rescue service in Texas, which then informed the New Zealand Rescue Coordination Centre.

"The model of locator beacon the hiker was using is also capable of sending and receiving text messages, meaning he could send a text to his local rescue service [in Texas] to say he needed help," police said.

The weather was too poor to send out a rescue helicopter, but police and LandSAR volunteers reached the man on Tuesday evening. They were unable to cross the river until the next day.

Senior Constable Reuben McCormack said they recognised immediately that the river was too dangerous to cross.

"By Wednesday morning the river level had dropped significantly and the team was able to cross to the hiker, assist him across the river, and walk him out of the park," Mr McCormack said. 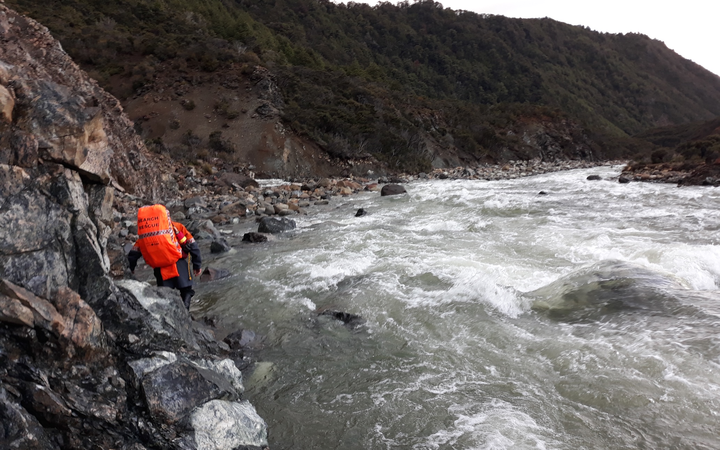 A search and rescue volunteer preparing to cross the Motueka River to reach an American hiker. Photo: NZ Police

Mr Muse, who was mildly hypothermic upon his rescue, said he was hugely relieved to see the rescuers arrive even though he had to wait all night before getting to safety.

He said river conditions in New Zealand were very different to what he had experienced in other parts of the world.

"I've hiked all over the world and I've never been in an area so immediately responsive to rain, the way the rivers are here.

"The levels rose dramatically at a rate I've never seen."

His decision to cross where he did was the result of a combination of factors, he said.

"I'd been out in the field for six days, in the Mount Richmond Forest Park area, and I'd had two to three days of heavy weather with high winds and rain."

Mr Muse said he was able to access weather forecasts on his GPS locater, and knew he was facing five more days of rain.

"I was almost out of food and I had to make a judgement call whether to wait out in the area I was in, or push forward."

He said he had already managed five difficult crossings that morning, and on the sixth he was swept down-river, almost into the confluence of the large and flooded Motueka River.

Mr Muse said he unbuckled his backpack before stepping into the stream.

"You don't want something like that pushing you down if you get pinned by the river, so the first step is to unbuckle your pack and then scout the river for as long as you to find the safest point to cross."

Mr Muse said he figured the safest point to be a stream near where it fed into the Motueka River. He stepped in, and lost his footing.

He said it all happened in about three or four seconds, but time slowed down for a while.

"I've gone swimming in rivers before and a couple of instincts kicked in, but I also knew I was in a bad spot after that. There was a whirlwind of stuff going on at that point."

He said it was crucial to try to swim and "not just flail" - and not stand up, which would risk trapping his feet in boulders and drowning him.

"It was a matter of staying on by back or on my stomach and swim in either direction towards shore, whichever one is most useful at the time."

The river eventually dragged him towards the opposite bank. Once he had managed to scramble out, he was relieved to still have his backpack.

"That was a life-saver. I keep my GPS locator on me in case I do lose my pack, but I was soaked to the bone and cold, so all the gear I needed was dry.

"If I'd lost that it would have been a very different situation. I could have died from hypothermia."

He said it was the closest call he had ever had.

"I've hiked solo thousands of miles, including a couple of big long trails in the US, and in isolated situations, but a big factor here was my unfamiliarity with the rivers here.

"If I'd known that, I certainly would not have continued - I would have stayed put that morning.

Senior Constable Reuben McCormack acknowledged the efforts of the LandSAR volunteers, who provided an invaluable service to New Zealand communities.

"Without their support, the hiker may have decided to try crossing the river again, leading to a tragic outcome."

Mr McCormack said Mr Muse had not been put off by his experience, and planned to continue his journey on Te Araroa Trail.