Christmas has turned into a time of mourning and pain for Auckland's Samoan community, as those back home battle with a measles epidemic. 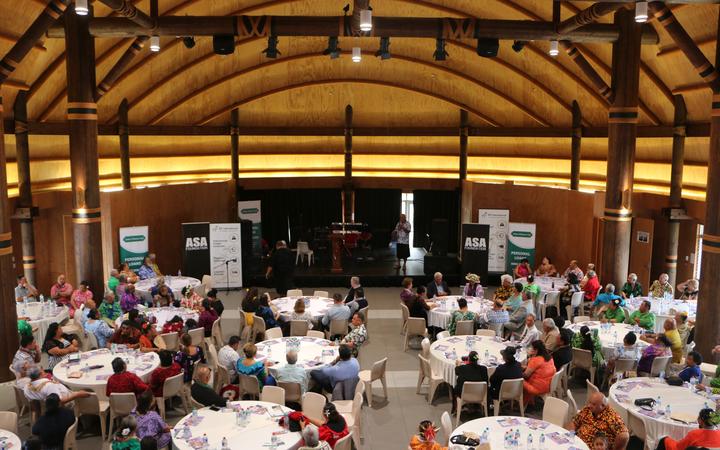 A prayer meeting in Māngere organised by the ASA Foundation Trust which is raising funds and sending supplies to Samoa. Photo: RNZ / Jessie Chiang

About 160 Samoans gathered in Māngere last night to pray and to collect medical supplies to send back home.

The meeting was organised by the ASA Foundation Trust, a Pasifika group fundraising for Samoa.

Its chairperson, Teleiai Edwin Puni, said it was a tough time for the community.

"Samoa is a small country and we know a lot of these families and some of them are a part of our families. A lot of people overseas are hurt, are mourning and are devastated," he said.

"This [meeting] is to try and unite a community that is going through a lot of uncertainty. There is no certainty when this will stop - every day there is another one or two [children] who are dying."

The death toll from the epidemic yesterday rose to 60 following the deaths of five people within 24 hours. Most of those who have died since the outbreak began in October have been children.

Teleiai Edwin Puni is going back home to Samoa next week for Christmas, but expects it to be very different this year.

"Usually this time of the year it's Christmas, it's celebrations but we're going into a very sombre atmosphere. There are no big parties in Samoa, everyone is just trying to make sure their families are safe and their children make it to another year," he said.

A mandatory measles vaccination programme is underway in Samoa, and vaccines are available for people aged 6 months to 60 years. People who haven't been vaccinated are being told to stay home to wait for mobile medical vaccination teams, and to put a red flag at their gate.

The country's immunisation rates have never been high, but a reluctance to get vaccinated has been blamed on the deaths last year of two babies given botched MMR vaccines.

Caroline Kaisala, who attended the prayer meeting, said there was a lot of misinformation about getting the jab.

"They've had a lot of reasons to think that getting an injection might be dangerous so it's just getting the word out in our home country that it is ok to get a vaccination and you won't die from it," she said.

Tuala Tagaloa Tusani helped run the event and was not impressed with the Otago Daily Times publishing a cartoon joking about the measles epidemic in Samoa.

But he said now was not the time for more hate.

"I've been to Samoa and I've buried some of those kids so I've seen the pain in those parents. What we're trying to do is bring some comfort by prayers or [sending] supplies so if you have time to hate that guy then you're focusing on the wrong issue," he said.

Mr Tusani said having a prayer meeting was extremely important to the Samoan community at this time.

"We are religious people, we're believers in God and we're Christians so when a tragedy like this happens we turn to the one thing that brings strength to all of us and that is our faith in God," he said.

The ASA Foundation has already sent a shipping container to Samoa full of supplies for children and a second container is now being packed.

The organisation thanked companies EIF International and Mainfreight for offering their services free to help transport the goods to Samoa.