Wanaka and Queenstown are on high alert as their lake levels near flood levels while some shop owners are taking action to mitigate potential damage. 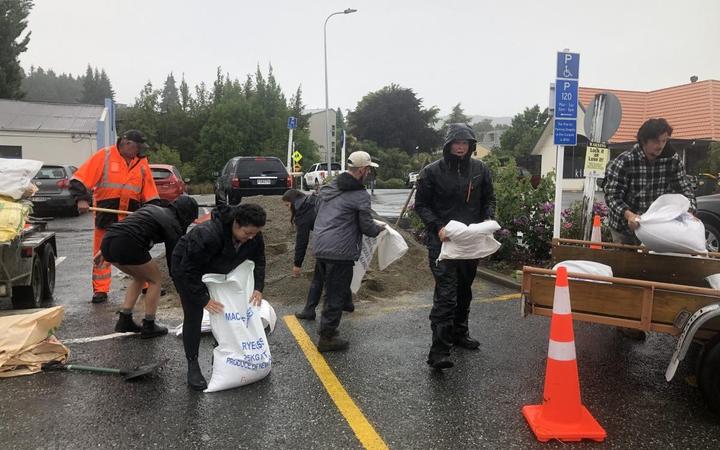 Volunteers from Kai Whakapai arrived at 9am to get free sand bags from Dunmore St carpark. Photo: Kerrie Waterworth / ODT

Some businesses began sandbagging in Wanaka last night as water started lapping at the base of the waterside office of watercraft hire business Lakeland Wanaka.

Queenstown Lakes District Council delivered about six cubic metres of sand about 8.30am this morning to Dunmore St carpark and more is to come.

Volunteers are helping fill and deliver sandbags to storefronts opposite the the lake.

Some shops facing the lake have been clearing out their stores of furniture and wares to mitigate any potential damage.

A reporter said Wools of Wanaka, on Henwick St, had been completely emptied and items taken away in a transport truck.

Employees of Big Fig started clearing out furniture, stock, and glassware from the restaurant yesterday afternoon.

Kai Whakapai Cafe owner Roger North said he has been inundated with offers of help and he had been clearing out his cafe as well.

The council's rain model had predicted the water would reach up to the front of the shops based on the predicted rainfall up to Thursday, Mr North said.

However, the forecast now predicts the rain will continue past that point. Mr North said he was taking precautions.

The council has also blocked off access to car parking near the waterfront with cones this morning.

We've got a number of parks, tracks and toilets closed in Wānaka due to potential flooding. While we can't imagine anyone is particularly keen to enjoy things like the Dinosaur Slide at this time, please avoid these areas for now. We'll provide updates when water levels drop. pic.twitter.com/ifeOpNDqCS

The QLDC posted to Facebook saying: "Current conditions and future modelling of rainfall and lake levels in Wanaka and Queenstown are being assessed now."

The harbourmaster has asked for owners of kayaks and small craft, tethered or otherwise, on Lakes Wanaka or Wakatipu to retrieve them as soon as possible, it said.

It said with the risk of flooding in low-lying parts of Ardmore St predicted by ORC modelling, it had decided to provide protection measures for concerned businesses and property owners as a precautionary measure.

The conditions and predictions would be reviewed early this morning and if needed, sand and sandbags would be available from the Dunmore St car park, the council said.

Roads in the Ardmore Street area would also be closed if need be.

Wanaka was drenched by 13.6mm of rain between noon and 4pm yesterday, having earlier had 9mm fall between 2am and 4am.

Queenstown also had an early morning downpour, as 14mm fell between 2am and 4am, with a further 7.6mm falling between noon and 2pm.

The MetService issued a heavy rain warning last night, which predicted 100mm-150mm of rain about the main divide, with 70mm-120mm of rain within 20km further east.

Rain hammered the West Coast, where more than 400mm was recorded on the mountains in the area, and 324mm recorded closer to sea level at Milford Sound.

"Further periods of heavy rain are expected for the rest of this week, and additional warnings will likely be issued closer to each event," MetService said.

Lake Wakatipu was likely to be close to the level where water levels could inundate low-lying lakeside reserves (including in the vicinity of Glenorchy) and enter the stormwater system in Queenstown this morning.

Strong winds were also forecast, which could cause waves, and boat users were urged to be aware of submerged logs and other debris.

In Wanaka, Jarvie Plumbing took the precaution about 5pm yesterday of sandbagging around the BNZ in Ardmore Street, which it looks after. It said would be back at 5am today to check on the building.

Other Wanaka businesses, including Lakeland Wanaka, moved equipment and fittings to higher ground.

Office manager Amanda Grant said because the building was on stilts it was all right overnight, but the company would reassess the situation today.

Deep Canyon, which operates from the same building, has also moved equipment out.

General manager Ros Goulding said the company was still operational, but like many tourism operators, the situation would have a financial effect.

"It's super disruptive to everyone ... especially right on Christmas."

Persistent rain throughout the day, particularly heavy at times, had filled the catchments and rivers were raging, prompting the town to go on alert.

"Water is touching the little log cabin [on the lake front]," he said.

"The main wharf is completely under water, you can't even see the posts sticking out."

The rain also closed several South Island roads and forced the closure of the Tuapeka Mouth punt bridge on the Clutha.

A Clutha District Council spokesperson said the strong river flow put the bridge in danger of being swept away.

"It's been going at 1200cumecs for the past day or so. It's predicted to get to 1400cumecs by midnight tonight."

He said it happened "every two or three years". Trees came down around the region, and various roads were closed.

"They were kind of gone by 2.30. You had a period there where you had heavy rain coming out of those thunderstorms."

This was caused by a warm northerly front flowing across the country ahead of a cold front.

Today, a nor'westerly flow would pass through Dunedin and a maximum of 23C was expected.

There would be a short period of rain in the morning.

Authorities are monitoring two 20-foot shipping containers that are floating on the Buller River.

- This article was first published on the Otago Daily Times