A man is warning people to check their strawberries after his friend was taken to hospital when she had eaten some with glass in them. 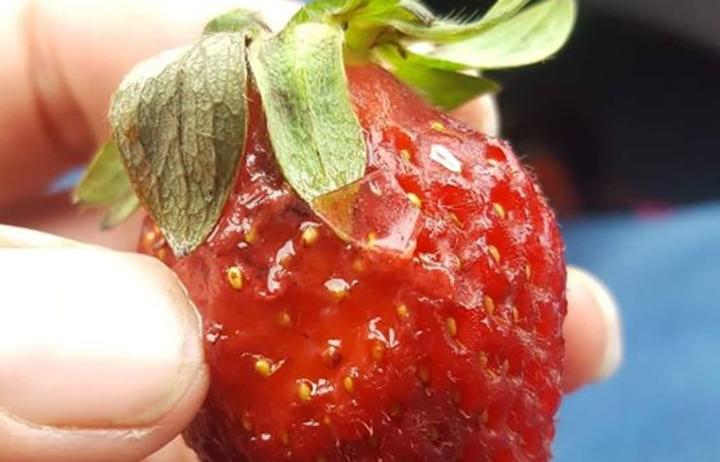 A pair of Porirua Pak 'N' Save shoppers found glass bits on their strawberry. Photo: Supplied

Adam Reeve purchased a punnet of strawberries from Pak 'N' Save Porirua yesterday afternoon. As they were trawling busy afternoon traffic, they decided to pull in and get some to snack on for the rest of the journey.

Mr Reeve said his friend was busy munching them down when she made the discovery.

"She'd eaten a couple of strawberries, and then when she bit one, it sort of went 'clunk'," Mr Reeve said.

"Then I went to eat one and she said "Don't eat that!"

She then held up a large chunk of glass - about 10mm across - while other bits looked like jelly crystals that stuck to the fruit like tiny speckles, he said. The glass wasn't inside the fruit, but had skewered into it.

"They had little fragments of glass, small pieces of glass similar to what was in a light bulb," he said.

"It made us wonder whether a light had blown over the containers while it was being packaged or something.

"I have no idea what it was but that scenario was the only thing I could think of."

Mr Reeve's friend started to have chest pain and a sore throat after eating them so he took her to Kenepuru Hospital. 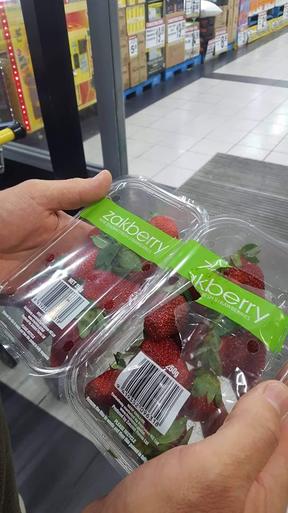 A pair of Porirua Pak 'N' Save shoppers found glass bits on their strawberry. Photo: Supplied

He said they were told by the doctor that because of the thickness of the glass, it was unlikely to do much damage.

"It was a very scary time," Mr Reeve said.

After making Pak 'N' Save aware, they were asked to return and were offered payment for the medical care and reimbursed for the strawberries.

"They then asked us if we wanted more strawberries, and we said 'No, thank you'.

"I'll eat the ones we grow at home, but not from the shops!"

A Foodstuffs spokesperson said it was an isolated incident.

"We can confirm that we have secured and removed all contaminated product from the store.

"This incident is isolated to this particular store and has no impact on similar product at other stores."

Foodstuffs is working closely with the Porirua Pak 'N' Save, the supplier and MPI in investigating the situation.