An eyewitness said she saw large debris swirling around the sky like paper as a tornado hit Christchurch, injuring two people when a store's roof collapsed.

The weather in the central city changed suddenly after 1.30pm, with large hailstones pelting the city, along with thunder and strong winds.

Along with a temperature drop, a tornado also struck parts of the city. MetService have confirmed a tornado was formed.

TORNADO CONFIRMED
Thanks to the video footage posted by members of the public we have been able to confirm that the Severe Thunderstorm we warned about did indeed form a tornado.
Tagging us in weather images does help us confirm our forecasts - especially tornadoes ^Lewis pic.twitter.com/MUKih5Gl77

Fire and Emergency say a roof collapsed at a SaveMart in Sydenham due to the tornado and it's left a trail of damage from central suburbs to the city's coastal areas.

Both people who injured were inside the building at the time.

St John said the two people have been taken to Christchurch Hospital with moderate injuries.

Speaking from outside the SaveMart store, Fire and Emergency assistant area commander Mike Bowden said a number of properties have lost roofing.

"There's been a swathe of damage through Christchurch for this very short and sharp burst of weather that we've had, so it comes really from this side of town right through to New Brighton, we understand there are properties that have lost rooving and there's been some other damage around the city as well."

Mr Bowden said the storm burst only lasted for a short period of time. 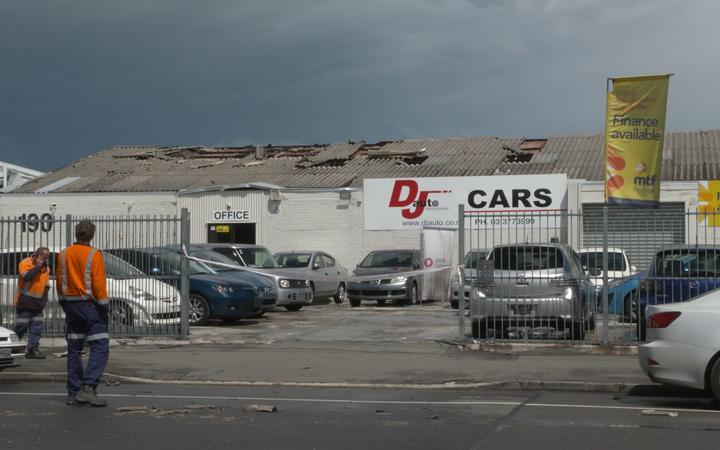 Eyewitness Victoria Harwood was in a central city apartment when she saw the tornado.

She said having never seen a tornado before, the experience was frightening.

"We saw these bits of debris sitting in the sky and swirling around. And from where we could see, it looked like it was paper, but as it got closer we realised it was bits of gib board, which I've now realised are probably off the SaveMart on Battersea St."

Further east in Richmond, Alison Kendall said the fruit and vege stand - which is a Toyota truck - had lost all of its boxes and fruit, which were flying everywhere.

Mrs Kendall said she had earlier tripped over when she ran to close a back door when it started hailing.

"And then windows were smashing and there was this bloody vortex thing going on in the back yard and everything's flying, and the fruit and vege man's truck just zoomed across the yard about 20 metres."

Mrs Kendall said she had been forced to close her shop, in order to clean up the glass from the broken window.

Raeonie Ellery was driving near Hornby when black clouds blocked out the Port Hills.

She said the hail was so intense it was like a bucket of stones being tipped over the car, and almost impossible to see.

"And as we were driving along it actually felt like an eclipse, this blackness came over us." 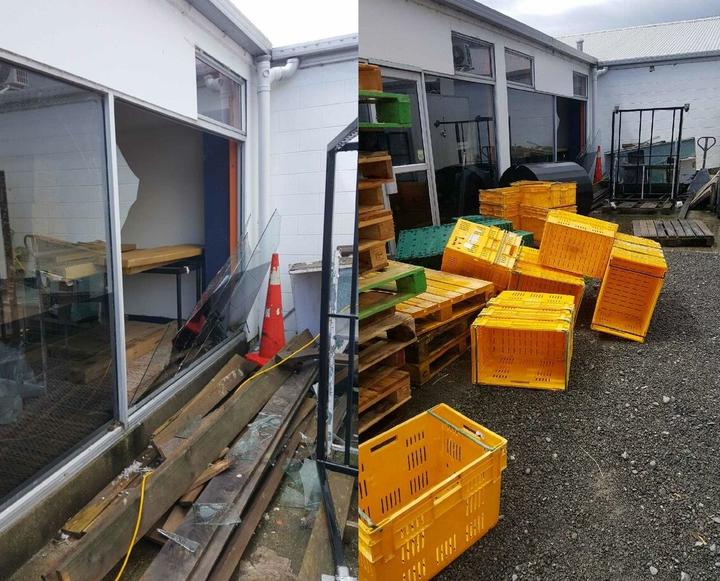 Part of the roof of a vehicle dealership on Wordsworth St was ripped off by the force of the tornado, scattering debris down the road outside, which has been closed for the cleanup.

A Fire and Emergency spokesperson said there had also been multitude of calls following the tornado, with reports of roofs being torn off and air conditioning units falling off buildings.

The spokesperson said while blue skies had returned to Christchurch after the brief thunderstorm, there appeared to be no lingering after affects on the transport network.

The Christchurch City Council said it had contractors on standby to check any potential damage from the tornado.

A spokesperson said contractors will check streets and parks now that the worst of the storm appeared to have passed.

Motorists are being asked to take extra care due to the conditions.

The number of cloud-to-ground lightning strikes is one way to understand the intensity of a thunderstorm.

Yellow strikes are the most recent (0-5 minutes old).

The safest place to be during a thunderstorm is indoors. https://t.co/oTqZeoa0KP pic.twitter.com/Os6jyWcOpH