Year 10 student Sarah Wong has been crowned champion of the fifteenth annual spelling bee, winning with the word 'stalactite'. 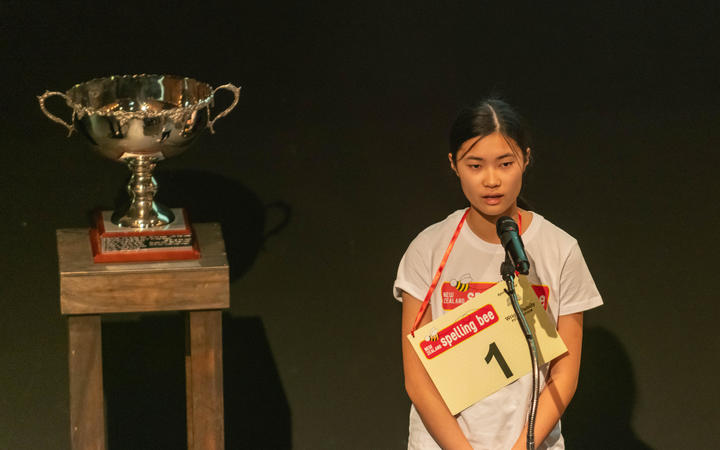 Sarah Wong won $5000 as well as a trophy for finishing in first place in New Zealand's spelling bee. Photo: Supplied

Ms Wong, who attends the Diocesan School for Girls in Auckland, came out on top in a competition that involved pupils from over 100 schools.

The final was hosted at Wellington's City Art Gallery, and had a record crowd in attendance.

Ms Wong won $5000 to go towards her academic pursuits, as well as the trophy, although she said she was not sure how she would fit it on the plane back home to Auckland.

Michael Yao - also in Year 10 - who goes to Auckland Grammar School, was runnerup, going out on the word 'aberrant'. He won $2000 for coming second.

It was a gruelling process to make it to the final, with competitors having to slog it out through 11 rounds, including an initial written classroom test, then regional semi-finals, and the final.

Eighteen of New Zealand's top spellers in Year 9 and 10 made it through to the final. It was Ms Wong's second time appearing in the final, after she made it to the final 18 last year as well.

"I don't really think it's sunk in yet, I'm still in shock," she said. "It was a really humbling experience because everyone else was so talented.

"On the day I was quite nervous, I think many of the other competitors were too, but it was a really amazing experience."

New Zealand Spelling Bee founder Janet Lucas said she was "thrilled" with the quality on show at the final.

"It's a really tough event. [Sarah] was the first speller, which meant she started first for every round. Number one was definitely her lucky number today."