Motorists are being asked to avoid Auckland's CBD as congestion builds around road diversions due to a fire at SkyCity convention centre. 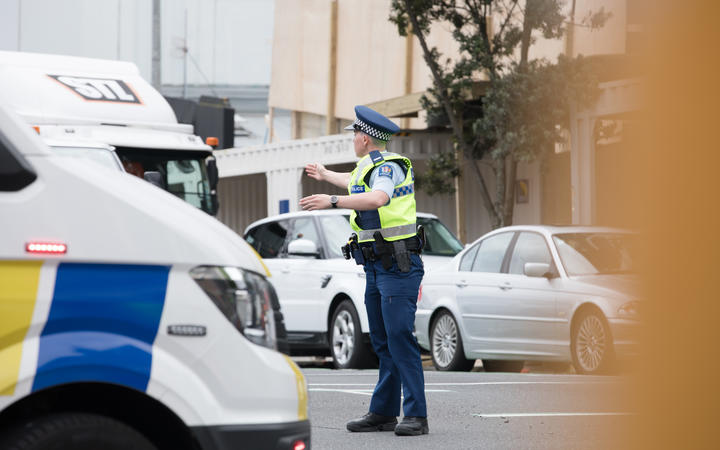 Police direct traffic on road diversions after a fire broke out at the SkyCity convention centre. Photo: RNZ / Cole Eastham-Farrelly

Fire and Emergency said the fire started on the roof of the under-construction SkyCity convention centre, before spreading to the sixth floor.

Bitumen and insulation is on fire and there are also concerns about gas cylinders in the area. The cause of the fire is not yet unknown.

Police say there is heavy traffic congestion in central Auckland because of the fire.

There are a number of cordons still in place around Hobson Street.

Police and ambulance staff are on the scene to assist fire crews and hundreds of people, including construction workers, have been evacuated.

They are urging motorists to avoid the Auckland CBD area and asking members of the public to stay away from the cordons.

Auckland Transport said emergency services have closed roads around the convention centre, including Wellesley and Nelson Streets and part of Victoria Street.

Auckland Transport is warning motorists and public transport users to expect delays and diversions for any that use these routes.

For more information on bus detours and disruptions see here.

People who were intending to visit SkyCity venues this evening - including restaurants on Federal Street - should make alternative arrangements.

It said it is available to help emergency services as required.

Acting director Sarah Sinclair said transport in and out of central Auckland is affected by the blaze and commuters are being urged to be patient and stay out of smoke plumes.

"There will be ongoing disruption this afternoon and evening, while roads remain closed and public transport is diverted.

"Please be patient if you need to wait for a bus or train, or in traffic.

"Bus stops may also be in areas affected by smoke, requiring people to move to another bus stop or wait elsewhere - we urge people to use their common sense; not put themselves in harm's way by standing in smoke plumes or downwind of smoke," she said.