South Island ski fields say it was a tough start to the season, but the snow did improve, and they are planning for warmer winters due to climate change. 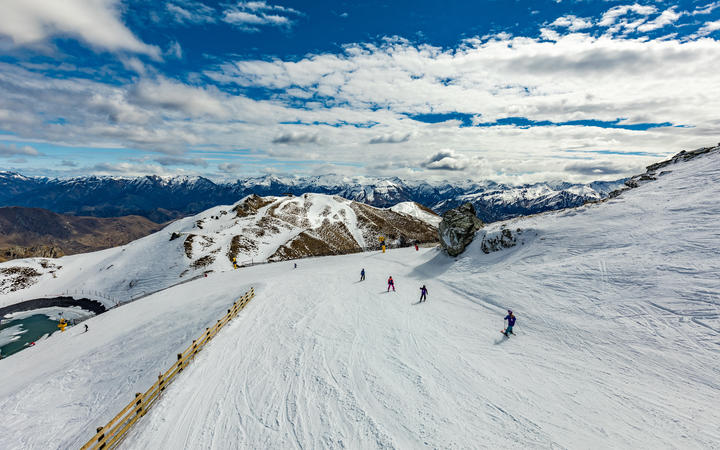 The resort's general manager Bridget Legnavsky said it was the earliest they had ever opened.

"We made the conscious decision this year to open the 1st of June and part of that is as we're moving towards our long term goal of being open 365 days a year, so stretching each end of the season and seeing what that would look like," Ms Legnavsky said.

The ski field received about a third less natural snow than usual.

"It was a hard year, but the one good thing going for us is we didn't really have any warm or significant warming events or rain events ... and we had some great snow-making temperatures, so the snow that we did have lasted really well."

Cardrona Alpine Resort is waiting for news on two significant projects - it's seeking consent from the Commerce Commission to buy the nearby Treble Cone skifield and from the Department of Conservation for a new lift, which would open up about 60 hectares of ski-able terrain.

NZSki operates The Remarkables, Coronet Peak and Mt Hutt ski fields. Its chief executive Paul Anderson said it was the company's second best year with nearly 700,000 visitors over the three mountains this season.

While there was less natural snow at the start to the season, Mr Anderson said staff worked hard to make sure they all opened on time.

Each of the ski fields has closed for the season, but he said the work was far from over with plans to upgrade one of the main lifts at The Remarkables to an express six seater, with two-and-a-half kilometres of new trails.

Coronet Peak would also open for its first full summer season ever, he said.

Bridget Legnavsky said it wasn't good enough to just work out how to cope with climate change.

"We've got to work out how we can help lead a better future for everyone."

Climate change meant ski fields wouldn't be able to simply rely on natural snow to fall on any given year, instead Ms Legnavsky said ski fields would have to be ready for anything.

The business would need to reassess its greenhouse gas emissions and make sure it was as sustainable as possible, she said.

"It's fairly obvious that diversifying and moving into summer, and repositioning ourselves from being just a ski resort to being an alpine resort with a lot of different things going on ... is becoming really important for our future."

Paul Anderson said the ski fields were preparing for a lot more variability.

"The investment that we've made in snow making and grooming - not just recently, but over the last decade - helps to insulate that and provides us with a reliability that particularly travelling skiers want and need," Mr Anderson said.

That meant an opening date could be almost guaranteed as snow making could start well-before the season and be stockpiled, he said.

But it was important to go beyond and work to become more sustainable and environmentally friendly, he said.

"Our vision is that the mountain environment can actually be better through our presence there. The way that we can do that is by removing all those pests, doing native revegetation, and improving the habitats."

Already Mr Anderson said the habitat work was making a difference - about three years ago no kea were living at The Remarkables, now there were eight.

Earlier this year the government proposed to replace the current industry training with Workforce Development Councils as part of the major changes to tertiary education.

At the time there were concerns it could lead to a loss of training flexibility and could mean some companies trained fewer employees.

Paul Anderson said NZSki has made a big investment in ski and tourism industry training for staff, and it was something the business didn't want to lose.

"When they come in they may have a low level of skill or they may have no training, and we can at least offer them something so when they leave at the end of the season they're leaving with a level three qualification," he said.

Making the effort made a big difference to the quality of service, Mr Anderson said.

NZSki would be closely watching what happened with the training changes over the coming year or two, he said.

Bridget Legnavsky said having the ability to train and upskill staff was incredibly important.

"With the proposed changes we're quite actively involved, and we really try and seek to engage with government and I think a big part of that is trying to find a way to continue developing education platforms and on-job training opportunities."

Mt Hutt, Coronet Peak and The Remarkables have all closed for the season.