Auckland trains were cancelled for several hours today after a car fleeing police drove onto the platform at Middlemore station. 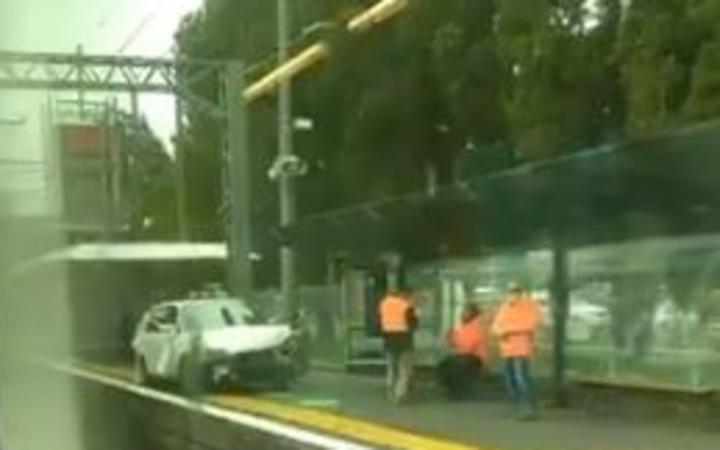 The 31-year-old driver of the car was taken to hospital in a serious condition after being tasered by police.

Three other occupants of the car were arrested.

Video posted on Facebook showed a white vehicle on the platform near Middlemore train station:

The incident began when police spotted a vehicle that had been stolen in Panmure shortly before 10.45am

Police units and the Eagle helicopter followed the vehicle, which was seen driving dangerously across East Auckland.

The fleeing vehicle was seen driving into oncoming traffic before travelling through Mt Wellington and Otahuhu, where it collided with another vehicle at the intersection of Atkinson Ave and Princes St.

Nobody was injured in the collision, but the driver continued to flee and drove the vehicle onto the platform at Middlemore train station.

A police officer deployed a taser while attempting to apprehend the driver.

Police said the driver suffered a "medical event" and is in hospital under guard, but was no longer in a serious condition.

Three people who were passengers in the vehicle were arrested and taken into custody including a 16-year-old who will be referred to Youth Aid.

Two women, both aged 20, were released without charge.

The driver is expected to be released later today and will face a number of charges.

Ben Ross was on a train heading to the city that passed through the station after the car had driven onto the platform, and shared a photo on social media.

"I could see the white car itself was very heavily damaged with no tyre tread on the right hand side. I could see police officers and Auckland Transport officers all standing around and I could also see engineers getting ready to move the car off the platform."

Mr Ross said there was an open pedestrian walkway with no bollards that a car could drive through.

Auckland Transport said the car appeared to have crashed through a fence onto the station's platform, which was near Middlemore Hospital.

"When I saw it and the passengers on my train saw it the first reaction was surprise, the second reaction was a bit of a chuckle because the Twitter meme that went around was park and ride extreme edition," Mr Ross said.

"If this had happened at ten past three you've got all the De La Salle and Kings College school kids on the platform and a shift change at Middlemore so that could have been a recipe for it to be a lot worse than what we saw it, as comedy."

Train services were affected on the Eastern and Southern lines, but Auckland Transport said normal service has now resumed.