A slice of beetroot or two in your hamburger is as Kiwi as pavlova or pineapple lumps, right? Well perhaps not any more. 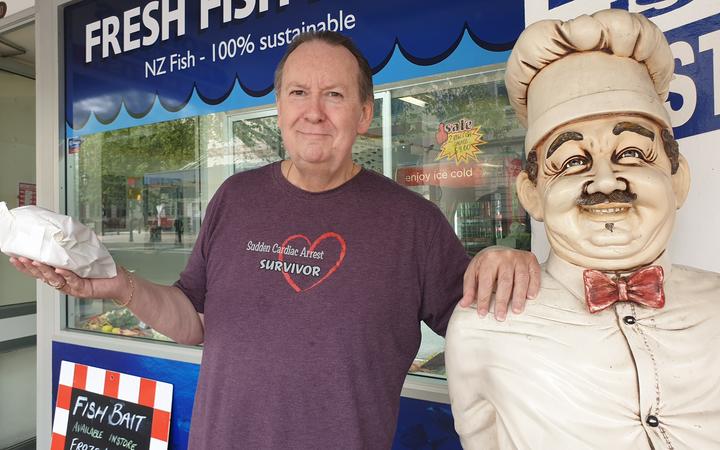 A Whanganui man says after setting off on a burger mission he was offered beet-free burgers at four different takeaway joints in a row before he took to social media to get help finding the elusive root vegetable.

Geoff Horne said his quest for a burger including the "purple-gold" started off innocently enough after his wife, who is on a ketogenic diet, said she did not feel like cooking and he should head out and get himself something for tea.

"So I went up to one takeaway bar and actually asked them 'do you put beetroot in your burgers?' and they said 'no, sorry we don't' and because that particular night I was feeling a little more bloody-minded than I normally am. I thought no I'm going to find beetroot for my burger."

Four takeaway outlets later the semi-retired former Aucklander succumbed to a beet-free burger but swore - never again - and took to social media for advice on the Whanganui fast food scene - earning himself the nickname the "Beetroot Man" along the way.

Mr Horne made it clear he was not looking for a burger from one of the international chains or a gourmet job, just a good old-fashioned sloppy 'n' cheesy hamburger like the ones he remembered as a child - but with beetroot of course.

A burger with beetroot was a rite of passage for Kiwis, said the 59 year old.

"When I was a kid ... every Friday night trundling down the road having to get takeaway tea for me and my sister. So I grew up with burgers. Good old New Zealand slop and drip burgers and they always had beetroot in them so kind of spoilt in childhood and missing it in adulthood."

And it was clear beetroot was no longer an option at some Whanganui takeaways.

Mike Zhan, the boss at Alma Road Takeaways in Gonville, had been in the business for 10 years and he was not a fan.

"We don't do it with beetroot so. It's just our thing yeah. I think more people ask for no beetroot than with beetroot ... but I don't know for other shops." 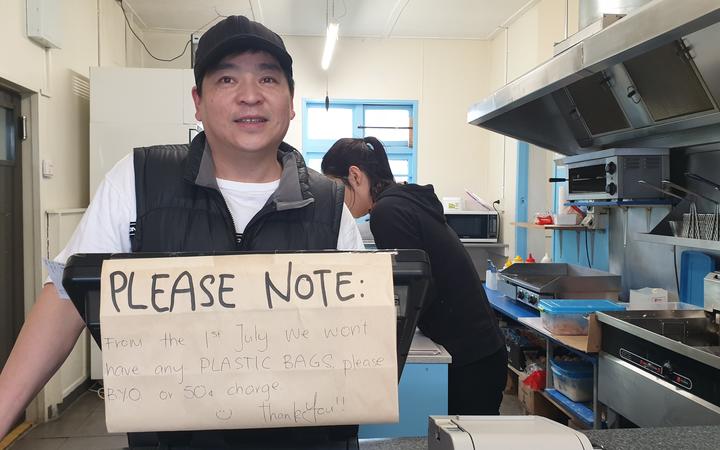 Mike Zhan says more people ask him to take out the beetroot rather than to have it in their burger. Photo: RNZ / Robin Martin

Over the river in East Whanganui, Sunnie Li at Quality New Fast Food said the stain-producing veggie was more trouble than it was worth.

"No, we only do tomato, onion and lettuce in the salad. No beetroot. Because lots of people ask for no beetroot so we just stopped using it."

One of those was George's Fish & Chip Shop on Victoria Ave.

Co-owner Brett Hayes said a burger without beetroot was just not a real burger.

He reckoned his burgers were simply New Zealand classics and that meant beetroot.

"Our meat patties are all homemade and we go through perhaps 70 to 100 burgers a week. We've got our salads with the beetroot on it. Yeah pretty much just a homemade old fashioned hamburger."

The burger buying public however was divided on the purple pickle.

Raymond Lawrence said it was a must.

"I reckon a real burger has to have beetroot in. It's just the flavour. It adds to the lettuce and gives it all a real bite."

Julian was not so keen however.

"For me just a bit of lettuce, onion and a bit of tomato. When the wife makes them at home she might throw in a bit of beetroot, but not for me."

Rose was not keen at all.

While Michelle reckoned it had to be there.

"Beetroot all the way. It's Kiwi."

As for Geoff Horne, he had found his happy place ... tucking into his George's burger. 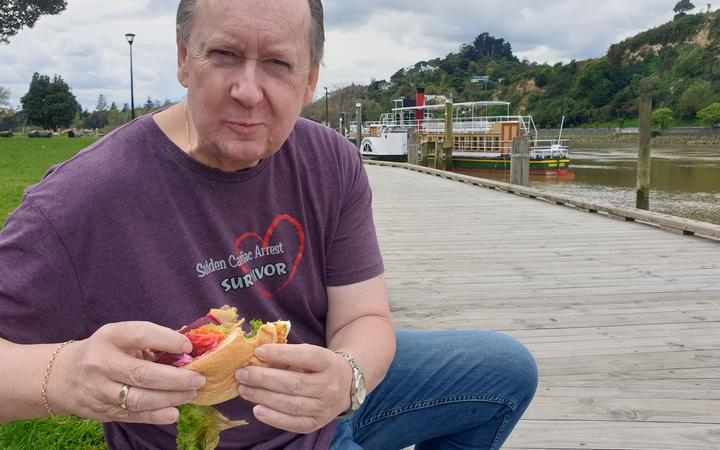 Geoff Horne was able to find plenty of places that serve a beetroot burger in Whanganui thanks to the internet. Photo: RNZ / Robin Martin

"It's pretty good. When I did the rounds last time I'd have to say these guys were one of the tastiest that I came across.

"Although I must admit the first time around there was only a very small piece of beetroot in it, but this time we seem to have got a generous amount so I'd be saying this is a pretty jolly good burger for New Zealand and Whanganui."