The authority responsible for Mount Eden in Auckland says a new boardwalk planned for the crater rim at its summit will support the mountain as a major tourist destination. 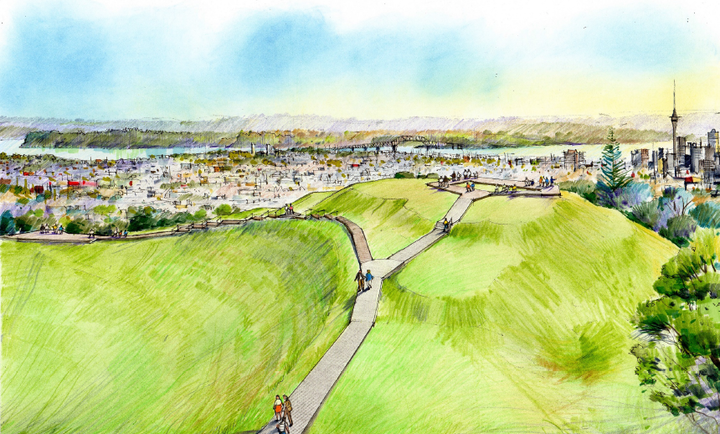 Construction on the walk will start next month and will include a viewing platform on the northern knoll at the summit.

Paul Majurey, chair of the Tūpuna Maunga Authority, said the crater track was last upgraded more than 10 years ago and has seriously degraded over time.

"Aggregate has washed into the pā features and the track has uneven surfaces and deep ruts which are getting gradually worse through constant foot traffic and the channelling of rainwater.

"The poor condition of the paths has caused people to make alternate tracks which are scarring the mountain. In places this has created a path over six metres wide."

With more than a million people visiting Maungawhau (Mount Eden) every year, now is the time for an upgrade, Mr Majurey said.

"The Auckland maunga, including Maungawhau / Mt Eden, are already on the tentative list for UNESCO World Heritage Status. There is much to be done before a formal bid to UNESCO is submitted, and a key part is demonstrating that the internationally significant natural and cultural heritage values are being properly protected. This boardwalk is another step in that direction."

The planning and design of the boardwalk over the past year has included consultation with industry experts in New Zealand and overseas, and a review of boardwalk design at historic locations and World Heritage sites around the world.

Construction is expected to be completed in early May next year.

Visitors will still be able to access the Summit Road and the southern part of the summit, but the crater loop track will be closed during construction.