Local Government New Zealand says it is still too early to make a prediction on voter turnout for Saturday's election. 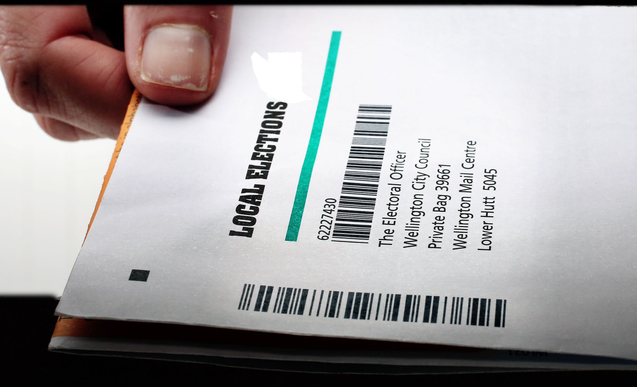 There are four days to go before local election voting closes. Photo: RNZ

With four days to go voter turnout around the country is varying, but is again looking likely to be low.

In Auckland, 22 percent of nearly 1.1 million eligible voters had so far returned their ballot papers. Hamilton is up on last time at 25 percent, Whakatane on 28 percent, Invercargill on 30 percent and Westland District currently with 38 percent.

At the last election in 2016, turn out was 42 percent nationally.

It was higher in rural areas at nearly 50 percent, but just below 40 percent in the cities.

Voter turnout has dropped by about 20 percent over the last 20 or so years, according to Local Government New Zealand.

Local Government New Zealand's Mike Reid said even with four days to go, it was too early to forecast the final turnout.

"What we find over time the patterns are not the same election on election as sometimes people will vote a lot at the beginning and not so much towards the end of the voting period and sometimes its reversed, so

at this stage, we are still fingers-crossed that we will get a good turnout."

He said there are some fundamental questions that needed to be answered, including what people understood to be the role of local councils.

"If you don't have a full understanding of all the local services that are delivered and paid for by local residents then you are not going to be so motivated perhaps to put the time into searching out the candidates to vote for and then voting. (Teaching) Civics and a better understanding of how government works, democratic processes, are quite important for the long-term."

Mr Reid said the number of people voting then shot-up, but it started to decline in the late 1990s.

He said voting has become more complex over time, with many more candidates.

"One of the really interesting statistics is probably a third of people say that they intended to vote but actually either forgot or they started the process, put the voting papers aside and then just didn't get back to it in time, so it is that 30-percent or so of people who kind of wanted to vote but ran out of time or actually said it took too much time to find out about the candidates."

Tony Bonne has been Mayor of Whakatane District for the last 12 years, but is not seeking re-election.

He believes voter turnout is low because people just take their local councils for granted.

He said while people can not be forced to vote, new ways are needed to make it easier for them.

"So maybe its a combination of a number of ways to vote."

Mr Bonne does not discount returning to have polling places on a specific day.

"There's merit to that because people know there is voting happening."

"All my time it has been postal voting but generally speaking that could be a way of looking at it."

Online voting is often suggested as a way to encourage voting, particularly from the young.

Mr Reid said the legal mechanism was available for online voting but it needed political will to do it.

He said it may not be the panacea people think.

"Looking at international experience associated with the introduction of online voting is that you don't get a large jump in the number of people voting and ironically the people who tend to use online voting most of all are middle-aged, people who are competent and would vote anyway."

He said it was not helpful to generalise about why people do or do not vote.

"This does not represent a crisis in any kind of way, but having more people vote is important because it impacts on the legitimacy in the sense of mandate elected member shave when they act."

People who still want to vote will have to drop their ballot papers back in person and in many places this includes local libraries, council offices and other public places.