The population of endangered flightless takahē has passed the 400 mark for the first time in at least a century. 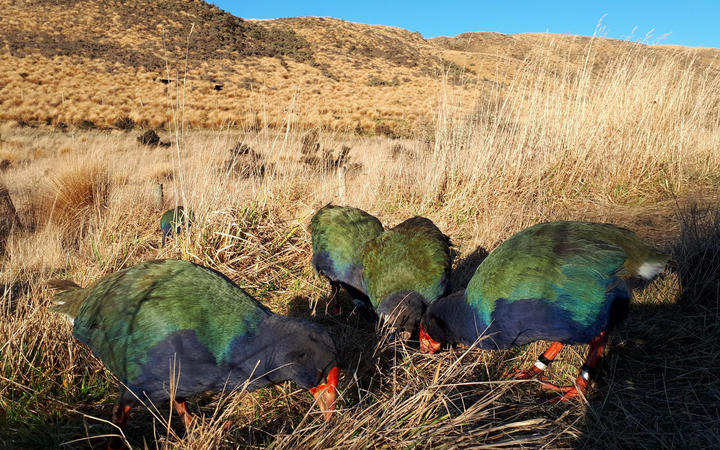 The species had been considered extinct until it was rediscovered in 1948, in Fiordland's Murchison Mountains.

The population has soared to 418 in the Department of Conservation's latest count and it follows a record breeding season that produced 65 juveniles.

Breeding pair numbers have more than doubled in the last six years, from 66 in 2013 to 130 today.

As a result, annual productivity has risen by nearly 300 percent in that time, Ms Sage said.

"While the overall population number is good news, the number of breeding pairs is a more accurate indicator of population health," she said.

"The number of takahē breeding pairs shows a good gender and age balance in the population and is critical to being able to keep pushing takahē further away from extinction."

About two-thirds of the takahē population is spread across 18 secure island and mainland sanctuaries.

Andrew Digby from DOC said those sanctuaries had been an essential part of the species' recovery.

"They've been really important especially over the last 20 years or so for just being a secure, safe place where we know that takahē are not going to go extinct, these island sites have been a mainstay of the population during that time."

In 2018, takahē were released into the Heaphy Track area in Kahurangi National Park in an to attempt to establish a second wild population outside of the Murchison Mountains.

"This was a major step towards the long-term goal of securing self-sustaining populations in areas of their former natural range," Ms Sage said.

"The Kahurangi population has grown and now has 31 birds. Almost all of the takahē have been gaining weight since their release. It is planned to release another 10 takahē there early next year."