An arrest has been made after bomb threats to Corrections staff caused the disruption of traffic in the Wellington region this afternoon. 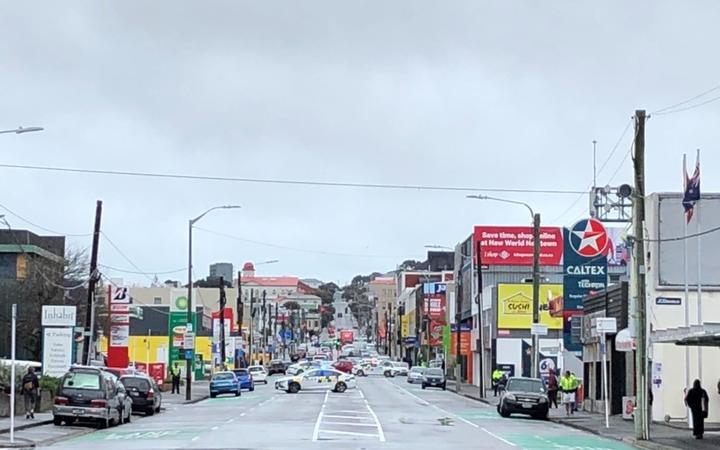 Adelaide Rd in Wellington has been closed off as police carry out an operation in the area. Photo: RNZ / Harry Lock

A Corrections spokesperson said multiple bomb threats were received, including threats against Community Corrections staff in Lower Hutt, and that police were immediately advised.

"We take threats to the operation and security of our facilities extremely seriously and have detailed protocols for dealing with incidents of this nature," he said.

"A Corrections vehicle near Wellington Service Centre was checked and cleared by police. The Lower Hutt Service Centre was evacuated but has since been cleared. We continue to work with police, and understand a person has been arrested in relation to making threats."

Police were called to four addresses, two in Lower Hutt and two in Wellington City, at about 1.30pm.

It's understood a threat was made via email and that the person who sent the email has been arrested.

Three of the sites - on Adelaide Road near the Basin Reserve and the Parliament buildings in Wellington, and Market Grove in Lower Hutt - have been cleared by police.

Police were also called to a cul-de-sac in Taita.

Police dogs had assessed the sites before roads and buildings were reopened.

The Wellington City Council said motorists can expect some delays while backlogged traffic clears after the road closures.

Cars were diverted onto Tasman Street, causing traffic to be back up.

A man working on Adelaide Road said the petrol station was evacuated.

Andy Burgin was working across the road from where a car pulled over and someone reported an explosive device just after 2pm.

He said the police told him the chances of there being a bomb in the car were low - but they had to take it seriously.

Mr Burgin said the area was in lockdown until the bomb disposal team arrived.

"The whole area has been evacuated, so it's basically an empty ghost town at the moment with police cars blocking off the road at either end.

"The service station has been closed everyone's been evacuated within a 200 or 100m radius."

Mr Burgin said his shop was not evacuated but he was told to stay inside.