There are concerns a former landfill only metres from Ocean Beach in Dunedin is an environmental time bomb. 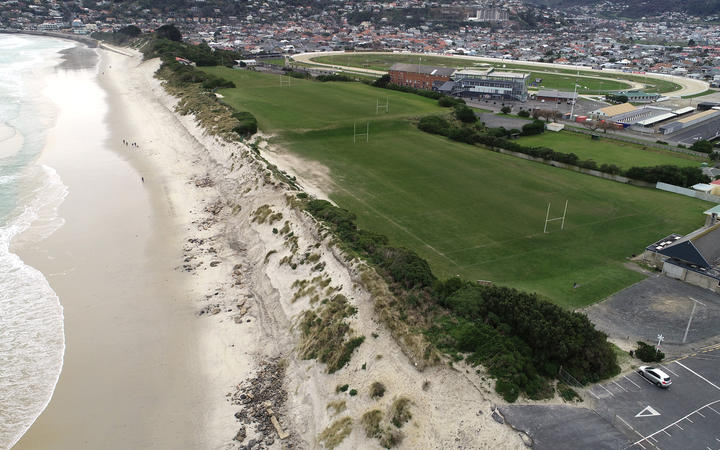 The Dunedin City Council will go to the public in coming months to gauge what the public wants to happen with the temperamental beach and wider area, but experts say serious consideration needs to be given to the landfill lying next door under Kettle Park.

Ocean Beach has been the frontline for man's battle against nature in Dunedin for more than 100 years.

Otago University associate professor Mike Hilton said the current geography of the beach - which runs for 3km along the city's southern coast - told the story of a long history of human intervention.

"It's important to understand that the council has inherited a landscape and that landscape is really the function of all the decisions that have been made in the last 110 years.

"The current council is dealing with a situation where much of the old dunefield and some of the beach has been reclaimed, including the Kettle Park landfill."

Lying only 25m from Middle Beach, behind a clay-capped dune lies the former landfill, which is buried and now used as a sportsfield.

That and the environmental fallout caused when a disused landfill ruptured into the Fox River, showed it was imperative to take action, Mr Hilton said.

"In the worst case scenario that's not enough protection, it's not enough buffer between the sea and the landfill. It's always going to be a little bit of a lottery as to how much time you've got but re-siting that landfill - excavating it, moving it somewhere else - has got to be one of the council's options."

The question was just how much time did the Dunedin City Council have to act.

"If we had a sequence of very large storms closely spaced separated by days or weeks, as occurred in 1978 when we lost the entire foredune at the St Kilda end, then you might be in big trouble. But I think the council can reasonably bet that they've got a few years to come up with a long-term plan."

The council had taken temporary measures this year, laying 100 sandbags along a 50m stretch of the beach to capture sand and shore up the dune.

"It's only been a month and the sand has returned and risen 2m to the foreshore."

Decisions on what would happen next to the landfill and the wider Ocean Beach area would involve the community, he said.

But he accepted the status quo could not stand in light of the threat of sea level rise, and for almost a decade the council had been gathering data and building its options.

"We are close to coming to the community with all those options. It's a complex, dynamic environment with a number of management options for the medium-to-long-term. So we're trying to distil all the information we now have down into something that's easily understood by the community."

"It's a diabolical problem and we need to think about that proactively, not be reactive, because we have the perfect storm so that needs to be considered very carefully by the council with the community."

He was cautiously optimistic about the forthcoming consultation on Ocean Beach, though he said the newly elected council would need to back it up.

Concerns over the landfill were only one piece of the puzzle and other issues, such as amenity and beach safety, also had to be addressed by the council's plan, Mr Egan said.

The council is expecting to present the information to the community and begin consultation in November.