A mining company's fight to dig for ironsands off the coast of Taranaki has begun again today in court. 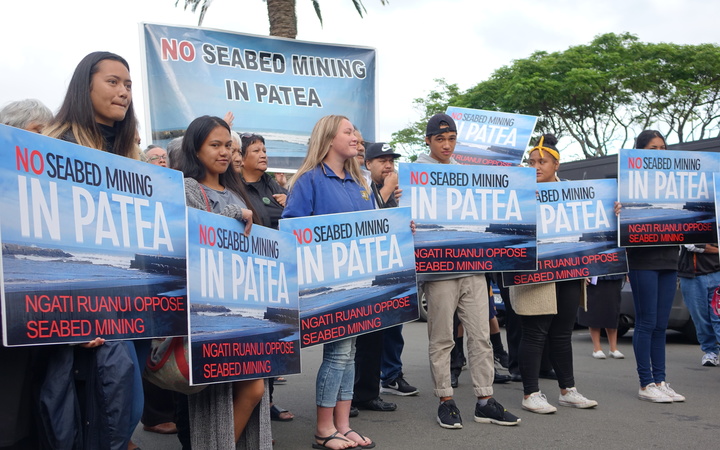 Trans Tasman Resources (TTR) was granted consent in 2017 to dig up to 50 million tonnes of sand off the South Taranaki Bight seabed each year, extract the iron ore from it, and dump the residue on the sea floor.

That consent was overturned by the High Court last year, after it was fiercely opposed by environmental groups including Kiwis Against Seabed Mining, Greenpeace, and Forest and Bird.

The crux of the argument in the Court of Appeal today centred on whether a raft of conditions that were issued with the marine discharge consent, amounted to an "adaptive management approach".

Adaptive management is a provision that allows for an activity to still go ahead, even if the information about its effects is unknown, or incomplete.

It can also be described as learning by doing, and adjusting the way something is done once more information becomes available.

The High Court found the conditions imposed alongside the consent, did amount to adaptive management, which is what TTR's lawyers argued against today.

Justin Smith QC told the court the conditions were no different to conditions imposed on other consents, in that if they were breached "you're out".

He said if it was adaptive management, the Environmental Protection Authority's (EPA) Decision Making Committee (DMC), which approved the application, would have known.

"The DMC was more than conscious of what adaptive management is and the [EEZ's] prescription of its use for the purposes of discharge consents."

But the respondents disagreed.

Lawyer Richard Fowler said the combination of the 109 conditions did amount to adaptive management because it required TTR to make changes once more information was gathered.

He also said some of the conditions did not have "hard limits" meaning there was no clear way to know if they had been breached or not, so was different to a regular consent.

Lawyer for Forest and Bird Martin Smith told the court the DMC was provided with information that contained significant uncertainties about the state of the current environment and the effects of the proposed activity.

"The conditions allowing adaptation were imposed in response to [a lack of information] so that info could be gathered and the activity adapted accordingly. That is the kernel of adaptive management."

The appeal this week is the latest in a long string of litigation for the parties.

TTR initially applied for consent to mine in 2013, the Environmental Protection Authority refused the consent in 2014, but granted it when TTR re-applied in 2017.

Last year a number of environmental groups, including Kiwis Against Seabed Mining, Greenpeace and Forest and Bird fought the consent in the High Court and won.

In September last year the company sought leave for this weeks appeal, which will continue to be heard for the next two days.