Pressure on the country's quarries has sparked a warning that road workers and building makers may be forced to import heaps of aggregate. 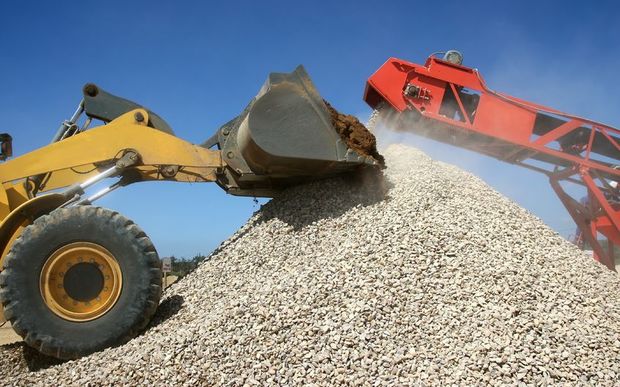 The industry says successive governments are to blame for what is now "crunch time".

Aggregate prices leapt recently, up more than 10 percent from 2016 to 2017, partly due to urban encroachment on quarries and rock having to be trucked from further away.

The largest motorway project, Transmission Gully near Wellington, has been forced to reopen a disused quarry for fear lack of supply will compound delays - it needs about 200 Olympic swimming pools full of fill.

"To prevent exhausting supplies around the lower North Island for other projects, the old Willowbank Quarry on State Highway 58 is being reopened to source much of these materials," the Transport Agency said.

It's a question of planning - or the dire lack of it, according to Wayne Scott of industry group Minex.

"The country has plenty of rock, plenty of sand, but it's getting harder and harder to get access to it."

It is being worked up in the shadow of looming huge demand from new taxi ways at Auckland Airport, the new Manawatu Gorge highway, Opotiki wharf, and roads for new suburbs and concrete for housing.

Mr Scott recounts basic failings, such as there being zero protection of key rock resources.

"This country has never had a full inventory of aggregates - it's just taken for granted.

"And then there needs to be some direction from central government to local government around how they protect that. Successive governments have been loath to give too much direction."

The upshot was key aggregate sources were not zoned off to protect them, which was vital given urban sprawl.

It was also unclear how the policy of no new mines on conservation land would apply to quarries, he said.

"Expand quarrying in the country because the demands not getting any less - or we're going to have to import it," Mr Scott said.

Shipping was cheap, but only three ports could handle such rock, and truck journeys would jump, he said; plus there was the problem of where to get it, as Australia's aggregates were taken up by domestic demand, and in Asia, many sources had lax or non-existent environmental controls.

Infrastructure Minister Shane Jones is a fan of fencing off crushable rock.

"I think it's a perversity that we'll have to import aggregate when the country is riddled with it," Mr Jones said.

"I thoroughly agree with the guys out of the aggregate industry, unless the Resource Management Act specifically makes an allowance for the ongoing operation of quarries, we're going to have to perhaps change the system, where quarries have as much rights as a rare Saddleback, or we'll all be on bloody saddles again riding horses because we won't have any roads."

He would take the idea of a national rock inventory to the incoming Infrastructure Commission, he said, and address the roping off of usable resources to the Environment Minister David Parker who is overhauling the Resource Management Act.

But just when something might come of that is in doubt.

"I'm not going to promise we're going to do anything in a hurry. We're already overloaded with national policy statements.

"And at the end of the day, there's a whole bunch of other things they're doing as well."

Wayne Scott warned that councils which were elected next month would have a lot on their plate, meeting changing obligations around water, urban development and biodiversity.

"On one hand, we've got limiting factors such as the government asking councils to increase housing development into some town belt areas, which stymies quarry growth, and of course you've got existing ratepayers who are concerned about living next to any new quarries," Mr Cull said.

"On the other hand, contractors want quarry sites to be accessible and as close as possible to worksites, and councils want to enable access to aggregate, which is vital to the growth."