The witness to the fatal Lime scooter accident says the rider catapulted over the scooter's handlebars, on what appeared to be a clear flat section of road, in near perfect conditions at Auckland's Westhaven Marina. 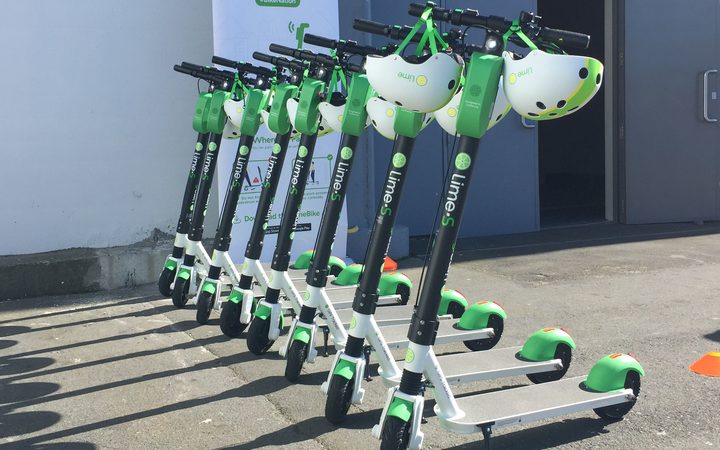 Lime had given Auckland Council a report from its assurance team that indicated it could find no fault with the scooter involved in the fatal accident. Photo: PHOTO / RNZ Colin Peacock

The 23-year-old died in hospital on Friday and police said the death had been referred to the coroner.

Lime is currently part of an Auckland council e-scooter trial.

Jeff Young said he was driving along West Haven Drive towards the Harbour Bridge on Monday 16 September, when he saw the rider on the scooter about 30 metres ahead.

"I noticed that he started to drift across to the right-hand side. And I believe that was probably looking over his shoulder.

"Then he got into trouble. And he went flying over the handlebars and landed on his back, and hit his head.

"I was doing approximately 30km/h. And I could only say that he was doing at least 15 to 20km/h," but Mr Young said he would rather leave it to the police to confirm the speed.

The rider was not wearing a helmet, Mr Young said.

He said when the accident happened, he saw the scooter's back wheel leave the ground.

"And yeah, he just flew. Probably, two to three metres, I guess."

The rider fell on his back, and his head hit the ground, Mr Young said.

"Whether there was a rock or something like that on the road, I had a look at the time, I couldn't see anything at all. And it's a very smooth road, it's a good road."

He stopped his car and nearby walkers came to help.

One woman called emergency services, and the young man was breathing when an ambulance arrived, within about 20 minutes, Mr Young said.

He believed police arrived about two hours after the accident and he didn't know if the Lime scooter was still there at that time.

Mr Hobbs said Lime had given Auckland Council a report from its assurance team that indicated it could find no fault with the scooter involved in the fatal accident.

He said no security cameras in the area cover where the accident happened "and it's a shame".

"We want to ensure there is no issue with Lime scooters or any other rideshare scooter at all, in terms of a systemic issue... the level of detail we've had ... is indicating there's no systemic issue.

"We will continue to advocate and push central government to change the rules. We don't control the roads, we have no involvement in the road user rules.

"Our job is to license them from a footpath. I don't want to abdicate responsibility, at the end of the day we need to ensure safety of Aucklanders, but we don't have any involvement in the speed, helmets and so on.

"We would like [government] to consider it, and come up with stronger regulations, sooner rather than later."