Excitement is building ahead of the Rugby World Cup in Japan which kicks off tonight with the hosts taking on Russia in the opening game being held in Tokyo. 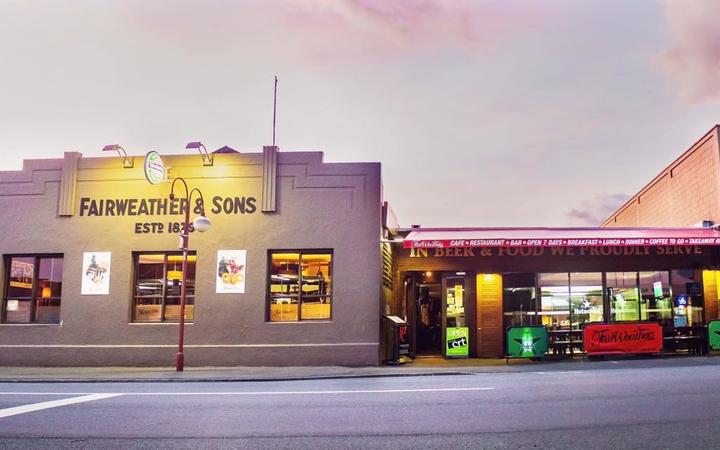 Fairweathers in Blenheim, where owner Warren Crofts its taking a big punt on the All Blacks' first try scorer. Photo: Supplied

Meanwhile, bars in New Zealand are gearing up for the event, with one Blenheim pub offering a $1000 a tab if its owner can pick the All Blacks' first try scorer.

Fairweathers owner Warren Croft is putting a lot at stake for the Rugby World Cup.

Mr Croft said bar patrons would get plenty of refreshments if he could correctly pick which All Black would score first against the Springboks tomorrow.

It has been tradition at the bar since the days of the old Super 14 competition.

"What we found is that by picking a player in advance ... it just added that extra bit of excitement with the game. And we found that people would come down, watch the game look, particularly for that first try whether or not we got up was incidental," he said.

Mr Croft said Japan's closer time zone to New Zealand meant he was hoping for some busy afternoons and evenings at Fairweathers.

He said rugby still enjoyed a strong following in the area, despite more sports now being on offer.

"Rugby is certainly one of those sports a bit like the racing. Rugby, racing and beer. They do go hand in hand with hospitality to the extent that it is certainly a sport that does go well with people relaxing and having a few drinks. And that's what we're all about," he said.

The All Blacks take on the Springboks on Saturday in their first match of the tournament. Photo: POOL / Photosport NZ

Meanwhile, in the Waitaki town of Kurow, also known as Richie McCaw country, locals are looking forward to the tournament.

Kurow Hotel manager Ross Paton, said the bar recently signed up for a package to show Spark Sport from their Sky TV decoder, a feature only available to commercial premises.

Spark Sport have the rights to show the Rugby World Cup in the country.

Mr Paton said with Kurow being the hometown of former All Black captain Richie McCaw, rugby had a strong following.

"Richie is still in everyone's mind even though he's not there now. But the All Blacks get a good following from Kurow and it's something that we we enjoy, we enjoy watching them," he said.

On the streets of Christchurch, Marcus Tebrake said he wouldn't be able to watch the opening games live because he didn't have Spark Sport, and will be watching delayed action on TVNZ.

"Yeah, I normally try to watch it on Sky, but not an option this year, unfortunately," he said.

Australian visitor Max Tunks will be watching the tournament closely in hotels and bars during his four days in the South Island.

He was confident that the All Blacks wouldn't win the tournament this year.

"Springboks are just going to take the All Blacks, the All Blacks are gone this year. They have had their run, no Dan Carter, no Richie McCaw. It's over for them, it's over. It's Aussie's turn now," Mr Tunks said.

But back in Kurow, Ross Paton believes the All Blacks are a good chance of winning their third world cup in a row, starting with a win over South Africa on Saturday night.