The terms of reference being drawn up for an independent review into Napier City Council staff monitoring of councillors' social media will not be made public, acting Mayor Faye White says. 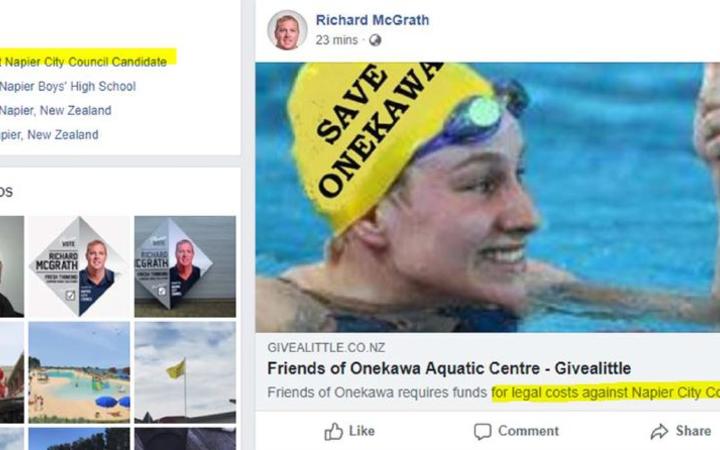 In one email, Wayne Jack asked for legal advice on whether Mr McGrath had breached the code or any other policies after he posted a link to a Givealittle fundraiser for The Friends of Onekawa Aquatic Centre, which is taking legal action against the council over the proposed pool. Photo: Supplied to RNZ in an OIA

The four were among the six councillors who had voted against a decision to demolish an old pool in the city centre and build a new $41 million pool on the outskirts of Napier.

Wellington lawyer Peter Chemis was last week appointed to carry out the review and was drawing up the terms of reference.

At the time Ms White told RNZ those terms would disclosed to the public once councillors and the chief executive had agreed to them.

But she now said it was an "internal review" and she did not intend to make them public.

"I am dealing directly with Peter Chemis in Wellington and the terms of reference are still some way off from being finalised.

"But I just want to reiterate that this is an internal review, and at this stage I don't intend to make them public."

It was hoped the review would be completed before the local body elections on 12 October.

Mrs White said it was "too early" to say whether the findings of the completed review would be made public.