A Whanganui couple's four-year fight battle with EQC after a third of their property was lost in a landslide during the 2015 flood event has ended in failure. 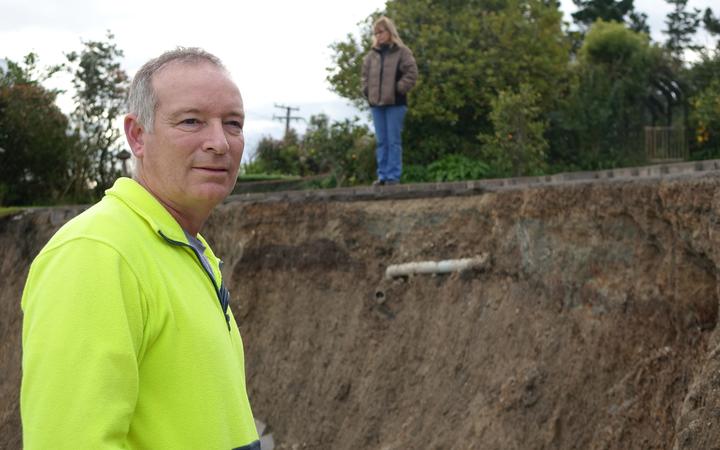 Mark and Nichola Goodier at the slip on their property in 2015. Photo: RNZ / Robin Martin

The High Court has ruled that damage to Mark and Nichola Goodiers' Basita Hill house was not caused by the slip.

The Goodiers argued that repairs to their house and garage would cost more than $500,000, but their insurer IAG could not pay out unless EQC first met a $115,000 cap for damage to the house.

The court agreed with EQC's expert witnesses who said that the house was built on solid ground not affected by the landslide.

"The damage to the Goodiers' home and garage did not occur as a result of the natural landslip and is not 'natural disaster damage'," the decision said.

Over the weekend of 20 and 21 June 2015, a one in 85-year weather event brought torrential rain and floods to Whanganui, resulting in as many as 200 landslips including one at the Goodiers' property on Shakespeare Road.

It washed away a huge chunk of their driveway and the lower slopes beneath it, including retaining walls.

On 30 June, the Whanganui District Council red-stickered the building and required the Goodiers to leave the property because their house was considered dangerous and uninhabitable.

The Goodiers argued that the landslip, which claimed land within eight metres of their house, damaged the garage and house as well as taking away land.

Argument in the High Court focussed on whether this was the case or not.

The Goodiers' counsel Grant Shand presented evidence from 24 lay witnesses - including the couple and their son Louis - who compared the condition of the house before and after the slip, presenting a long list of defects.

A structural engineer and building inspector for the Goodiers argued the landslide had caused sloping of the lounge floor, the warping of walls and doorframes, and that the garage slab had cracked because of it, among other faults.

The Goodiers' structural engineer proposed "vibration theory" as evidence that the landslide had damaged the home but had to accept under cross-examination "he was not an expert engineering geologist or a geotechnical engineer, and ultimately could not provide an explanation as to how or what caused" the damage claimed.

The family did not call a geotechnical expert witness.

Counsel for EQC and IAG said in the absence of any specialist geotechnical or engineering geologist evidence identifying how the landslide had caused the damage, the Goodiers had not proved their case.

Their specialist geotechnical evidence said the house itself was built on stiff and stable soil structures.

"This is because the house site was excavated into competent ground which remained unaffected by the landslip," the decision said.

Justice Cull noted in the decision that the insurers' provided the only geotechnical evidence and "it was not substantively or effectively challenged".

"I reject Mr Csiba's "vibration theory" as a mechanism for the cause of damage. Mr Csiba, as he concedes, is not a geotechnical engineer and his theory was advanced without any reasoning or supporting engineering data or research."

The experts agreed soils under the southwest corner of the garage had slumped, but the insurers witnesses argued a pile there had not been supporting the garage anyhow. Similarly, they said a pile below the lounge has settled independently from the slip, causing the sloping there.

They said damage to the house was for the most part historical, which reflected the complexity of the three-level design, with its split-level floors, and that a beam supporting the upper floors was deformed and the building had inadequate lateral bracing.

In her summary, Justice Cull found the damage to the Goodiers' home and garage did not occur as a result of the natural landslip and was not "natural disaster damage".

Justice Cull said EQC and IAG had no further liability other than that which they had already accepted.

The Goodiers and their counsel Grant Shand have been asked for comment.

"We are satisfied that the results show that we took every step to engage the appropriate experts to determine whether natural disaster damage had occurred. Even when a customer disagrees with us as such as in this case, we must follow the evidence and take the appropriate steps."

"It obviously doesn't leave the Goodiers in any better position and so for them I think it will be disappointing that they are still left with an uninsured loss and although that is how the Act and the policy responds it means they still do have a decision they need to make about how they utilise the property in the future."

Ms Walker said she expected the Goodiers would be meeting with their legal representatives to plan their next step.

"Unfortunately for the Goodiers, this means that they still have unresolved issues, and of course can still appeal this result".