A street artist whose Auckland mosque attack tribute struck a chord with the public has just completed a second piece on a prominent Christchurch corner.

Artist Paul X Walsh has painted 51 flowers on the side of Pomeroys Inn in Christchurch as a mural for the victims of the March 15th Mosque Attack. Photo: RNZ / Simon Rogers

Paul X Walsh was invited to paint the tribute on the side of Pomeroy's pub and Little Pom's cafe after its owners heard him being interviewed on RNZ in March.

With 12 spray cans and three days spent up a snorkle lift, he's immortalised the legacy of the mosque attack victims in 51 flowers, six months on from 15 March.

The recreational graffiti artist, turned full-time street artist, first adorned a wall in Avondale with a tribute to the mosque hero Naeem Rashid, four days after the attacks.

His depiction resonated with people across social media and he was offered flights, accommodation and the 12-by-12m brick wall in Christchurch to unleash his creativity - this time through symbolism.

"After doing the portrait of Naeem Rashid, I learnt that it's actually, in some parts of Islamic culture, considered Haraam or forbidden to paint portraits of living beings. But plants have always been a big part of Islamic art," he said. 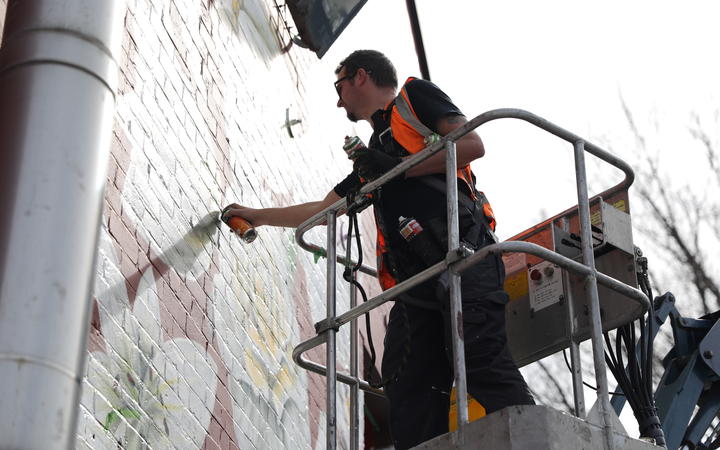 The mural takes the rough shape of a Persian mandala, depicting types of white flowers traditionally seen at Islamic funerals, along with tulips and roses and native New Zealand flora.

"There's also clematus, the New Zealand native, all around the outside and at the centre is hibiscus. I've actually recently learnt that we have a native hibiscus, the swamp hibiscus, which you find up in Northland," he said.

Mr Walsh has been in close contact with the Muslim community since his first mural, and said the latest was partly inspired by his experience attending Eid.

While Pomeroy pub owner Ava Nakagawa helped bring him to Christchurch, she said her and the other staff had taken a step back and avoided any input in the design, to let the creative process happen naturally.

"As a family business we've always been really big on community and we really believe in our city. For us this really cements our commitment to the city and believing in goodness and kindness - I think that's what it means to me," she said. 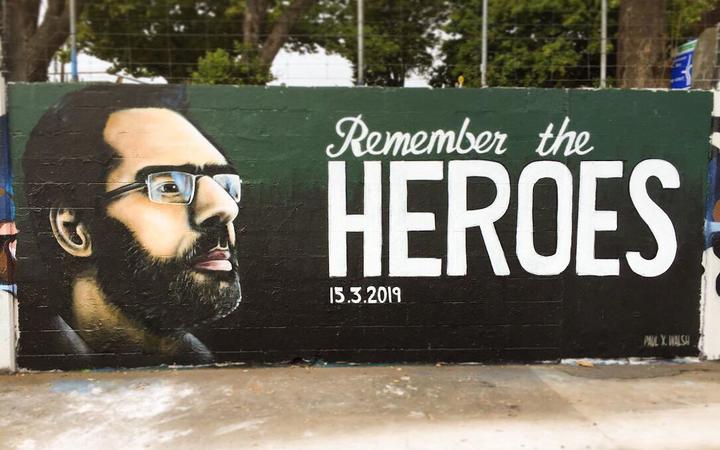 The mural coats a wall that dates back to the 1800s, and fronts an intersection about 40,000 cars whiz through each day.

Before its completion, it was already attracting interest from passers-by like Brian Cornish, who had spent about 20 years photographing Christchurch's street art and admired its healing properties.

"Just witness what happened after the earthquake here, where art became a big focus to the community and to the council and to everybody. It was neat," he said.

Helping the community was exactly what Mr Walsh said he wanted the mural to do.

"I've realised that it becomes a dialogue with the public. You sort of need to be less selfish and create more accessible and open pieces. Things like this, it's an emotional piece and it's personal to me but it's also a public mark of remembrance," he said.

Mr Walsh had already painted over his temporary Auckland mural, but not before it was replicated in the Pakistan city of Lahore.

He and the Christchurch pub owners had agreed the new mural was here to stay.

Mr Walsh is collecting donations to recoup the cost of it on his website.