Police have confirmed that four adults and a young child were killed after a bus rolled off the highway near Rotorua yesterday. 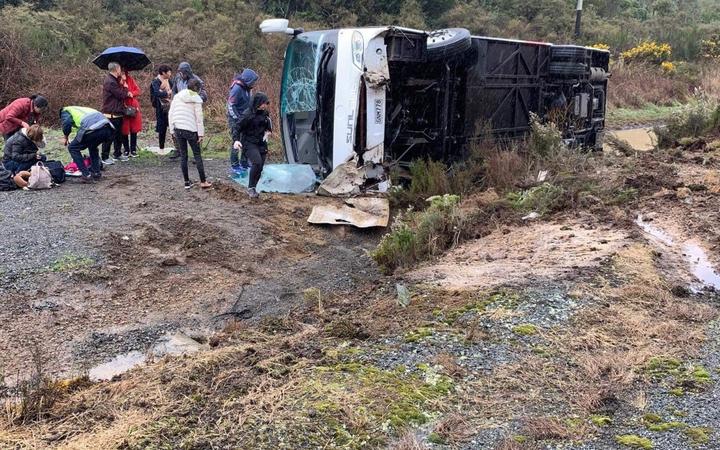 The bus was travelling south towards Rotorua when it rolled over a moderate-to-easy bend. Photo: Bishal Jung Basnet / Supplied

The tour bus was carrying 27 people - the majority of whom were Chinese tourists - when it rolled on State Highway 5, in Ngātira, west of Rotorua.

Bay of Plenty Road policing manager Inspector Brent Crowe said as the investigation continued, they had made good progress in identifying the deceased.

Police have been working with the Chinese Embassy to identify the five people killed and contact their next of kin in China.

The welfare centre set up in Rotorua yesterday to help survivors of the bus crash has now closed.

The scene examination on State Highway 5 has been completed. The damaged bus is in secure storage and will be forensically examined over the next few days.

Mr Crowe said it was too early to say what led to the crash and police were still asking for witnesses to call in.

The Rotorua Chinese community have rallied to support and provide food for the victims.

Robert Liu from the Rotorua Chinese Association said 10 volunteers had been helping with translating since yesterday and local restaurants had been delivering food to the survivors.

He had lived in the area since 2001 and said he had never seen such a bad crash.

"After [the] accident everyone was very shocked and very sad, but from 7pm last night people were starting to calm down," he said.

*Correction: The article has been amended on 23 September 2020 to say the crash involved 27 people - the majority of whom were Chinese tourists.