A body has been found inside an Auckland home on the North Shore that was gutted by fire. 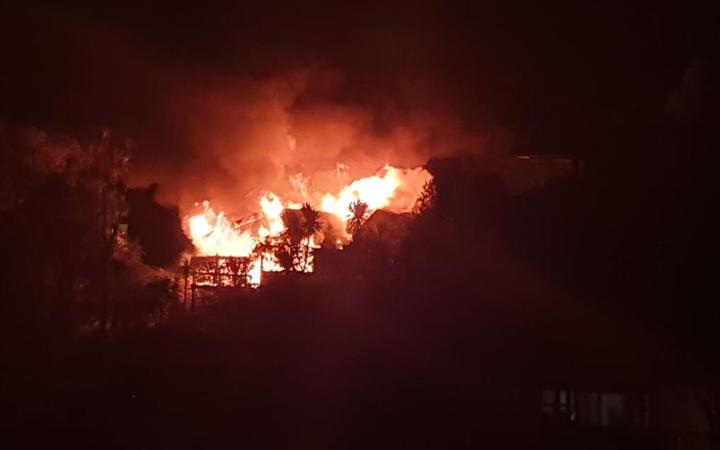 Fire and Emergency were called to Taumatua Road in Castor Bay just after 10pm last night.

About 20 firefighters were needed to put the fire out.

When they were able to go into the house to conduct a search, they found a body.

Fire and Emergency said there is no reason to believe the cause of the fire was suspicious.

A spokesperson said their investigators are working with police, but there is no indication the blaze was intentionally lit.

They said the incident will be referred to the coroner.

Meanwhile, police - who had a scene guard at the property overnight - said a scene examination was ongoing.

An Auckland resident who saw the fire said the home had been destroyed.

When you arrive home to find a neighbours house in flames. Frightening. Hope they are safe pic.twitter.com/Ss3Tvh1ftD

Lindsay Mouat, who lives in the area, saw the fire when he returned home about 10:30pm.

He said some of his neighbours, who had called Fire and Emergency, were standing outside watching the fire.

"There was this massive fire against the night sky - there is quite a lot of bush area around the location," he said.

He said daylight had revealed the extent of the damage.

"All we can see - the roof is still there but the house is completely destroyed. At one stage we actually thought there was a second property but it is actually a rather large house.

"That's just horrific… as we were standing and watching we were just hoping there was nobody there, it's an awful scenario," he said.

"It's very sad, whatever the circumstances it must be dreadful."

The last fire truck left the scene about 3am.