Documentary - After a party-fuelled decade of B-list action movies, the 'Indonesian Rambo' abruptly disappeared from the silver screen. Can destiny provide the stage for this Kiwi's triumphant return?

Mistaken for Sylvester Stallone in the streets of Jakarta, a New Zealand window-cleaner is offered the life-changing lead role in an Indonesian rip-off of Rambo. Catapulted to fame over 10 ass-kicking years of back-to-back low-budget movies, Peter O'Brian walked away from the limelight after turning to God. But 20 years on he is back. Will the stars align for Peter to finally fulfil his acting potential or will there be more tears, real tears? 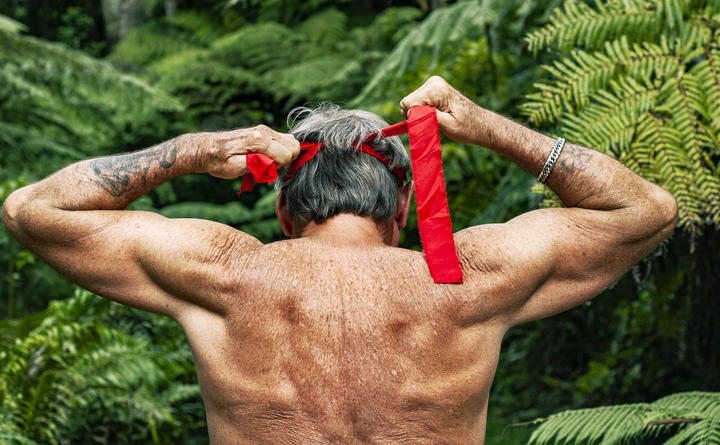 Will Peter O’Brian return to the limelight? Photo: Supplied to RNZ by Loading Docs

Steve Austin originally trained as an actor and has extensive past experience working as a professional critic, casting agent, and itinerant drama tutor. He was an integral part of the management team of V48HOURS Furious Filmmaking. More recently, he starred in the low-budget feature Ghost Shark 2: Urban Jaws and was an associate producer for Wallace Productions Ltd.

Austin is extremely passionate about film in every aspect, from all angles and is always striving to grow and support the wider industry. Operation: RAMBU! marks Austin's first film as director to be funded through a local platform.

Rajneel Singh is a Fijian-Indian director and producer with an innate passion for genre cinema and for bringing a globalised and technological perspective to the world of filmed entertainment.

He has acquired credits on such television programmes as Find me a Māori Bride, Custard's World, Power Rangers and the documentary series I Am.

Raj also has credits on feature projects such as Waru and The Devil Dared Me To as well as on international theatrical shows such as the zombie-apocalypse play Generation of Z and the Rob Tapert-produced musical Pleasuredome.