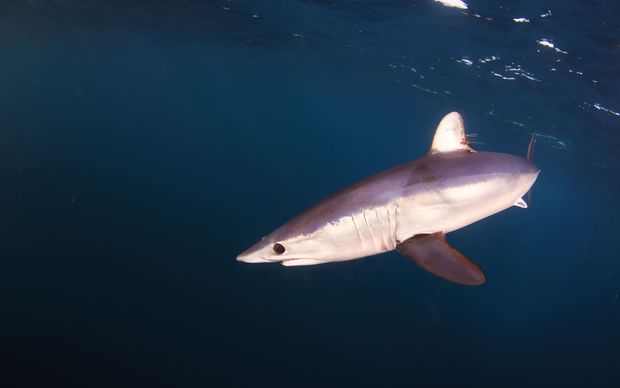 Wildlife experts from around the world are at the conference for the Convention on International Trade in Endangered Species in Geneva, where protections on species ranging from butterflies to giraffes - and sharks - are being considered.

A proposal to better protect mako sharks was passed by more than 100 delegates but New Zealand was among 40 countries opposing it - the proposal does not ban fishing but requires any catch for export to be sustainable.

"The New Zealand position is very difficult to understand, why New Zealand would oppose something like this which protects species that are highly at risk. Shark numbers have plummeted globally as a result of the commercial fishing industry, they get caught up in nets and on long lines so every protection should be given to them," Dr Norman said.

Mako sharks are the fastest sharks in the ocean, and although they are not a protected species in New Zealand there is a fishing quota for their catch and it is illegal to remove the fins from a shark and discard the body at sea.

Dr Norman said he could only speculate the reason for New Zealand's vote against protecting these sharks and it could be driven by fishing industry interests.

Shark fin soup is a delicacy in East Asia where demand for the dish drives the global trade in mako sharks.

Those against international protections for the sharks - including New Zealand's Department of Conservation - argue there's not enough evidence to show these creatures of the deep sea are disappearing as a result of fishing.

New Zealand is represented by experts from the Department of Conservation and the Ministry for Primary Industries.

In a statement, DOC international partnerships manager Sam Thomas said they consulted a panel of experts to form its position on the protections of mako sharks.

"Our panel thoroughly analysed global fisheries data about these species. Based on this, we do believe there are some fisheries management issues for the mako shark in some areas of the world which need to be addressed.

"However, our review found shortfin mako don't meet the biological criteria for a [protection] listing at this time because of their large global population, their wide geographical range and because their rates of decline don't meet the criteria."

Save Sea Foundation aims to protect the ocean, and its director Georgieene Bradley is at CITES in Geneva where she said there had been an increase in the number of requests to protect species this year.

"There are so many animals that are endangered or vulnerable or in harm's way that we are unable to keep up with the flow and that is particularly concerning," Ms Bradley said.

While New Zealand voted against protecting shortfin mako sharks, it voted for protecting rays in the wedgefish and guitarfish families.

The Convention on International Trade in Endangered Species, CITES, is an international agreement that regulates and monitors trade in wildlife.