The Hamilton City Council says it's confident a grandstand at Waikato Stadium, which is likely to require seismic strengthening, is still safe to use. 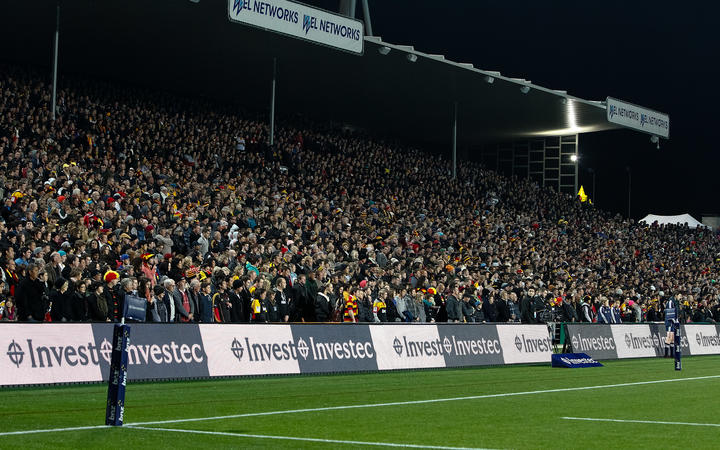 The WEL Networks Stand, which can hold 3000 people, is expected to come in below the New Build Standard after a comprehensive review which is likely to be completed by the end of September.

The council said the review is part of a government requirement to seismically assess all buildings after the Christchurch earthquakes.

The Hamilton City Council has been assessing all of its buildings and the WEL Networks Stand is just one of many.

The final report from engineers will most likely deem it earthquake prone and will mean some strengthening work on the stand will be required, the council said.

A score of less than 34 percent of the New Build Standard is considered earthquake prone.

Its general manager for venues, major events and tourism, Sean Murray, said if the stand comes in less than 34 percent then the council is required to fix it and it will have 12 years to do so.

Mr Murray said if the percentage score is really bad decisions will need to be made and that may mean closing the stand.

"We would make decisions on whether or not we continue to use the building.

"This is a building that is used very very rarely, it is used for a matter of hours every year being a rugby stadium, so the utilisation of it is incredibly low, so it's not like an office block that is open 24/7 for example."

Mr Murray said spectators using the stand can be assured that it is absolutely safe.

He said the initial report, which was a desk-top study, does not say the stand is not safe and like any other building it will continued to be used until the detailed seismic assessment is done.

"It's a matter of putting bit of a perspective on it and we just have to wait and see the degree of the assessment when it comes in and where it sits on the percentage scale.

"The assurance can be no greater than any one in any building, anywhere, at anytime should there be a disastrous seismic event," Mr Murray said.

"There are buildings with low ratings after having a Detailed Seismic Assessment that are still open and operating around the country and they are allowed to do so within the legislation."

People buying tickets for upcoming games, such as next month's All Black-Tonga test, are being told of the situation and are being offered the chance to relocate to the new stand, the Brian Perry Stand, he said.

The Waikato Rugby Union recently said it was not going to use the WEL Networks Stand for the Mitre 10 Cup this season, not because of concern over an earthquake risk, but because of dwindling attendance numbers at games.