Fifty lightning strikes have been recorded west of Auckland within a hour today as communities in the Far North remain on high alert after a severe thunderstorm warning. 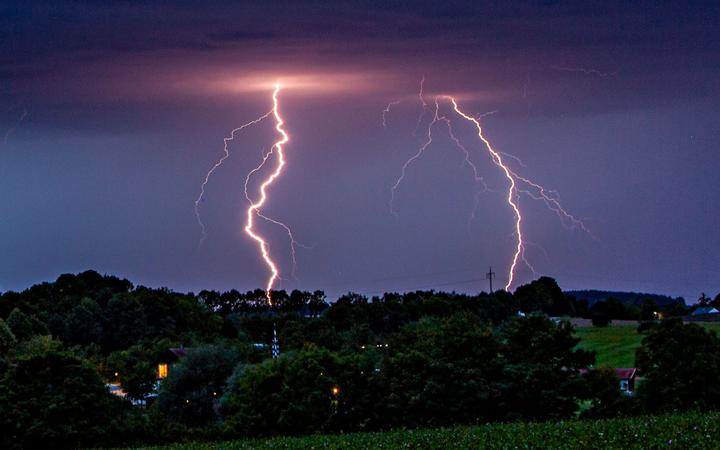 Niwa says there were 50 lightning strikes off the west coast of Auckland in the hour to midday (file photo). Photo: AFP

In the Far North, the thunderstorms are expected to be severe.

The Transport Agency is warning drivers on Auckland's Harbour bridge to take care because of strong wind gusts, and parts of the city have had downpours already this afternoon.

Heavy rain has forced the closure of a shop in Auckland's Sylvia Park shopping centre earlier this afternoon.

The deluge caused leaks at the L'Occitane cosmetics store. The centre's owner, Kiwi Property, said it hoped to have the store reopened as soon as possible.

Niwa said there were 50 lightning strikes off the west coast of Auckland in the hour to midday.

In Northland, there is a chance the thunderstorms will become severe tonight and early Friday morning, producing wind gusts of more than 110km/h.

The thunderstorms are likely to hit other areas early tomorrow morning.

There is also a possibility of tornadoes developing.

️An active morning both in the upper North Island and the Tasman ️ pic.twitter.com/UEPtxT1UdI

MetService meteorologist Angus Hines said there was a "very unstable" airmass moving across New Zealand from the Tasman Sea.

"It's bringing a whole host of different weather with it. It's obviously bringing some fairly intense bursts of rain and a lot of the areas of rain are coming with cells of thunderstorms ... we're expecting that to continue through today and tonight," Mr Hines said.

"Most of the North Island is currently underneath that same weather situation ... later on today and tonight and overnight we have a bit of a more enhanced area, which is potentially going to be bringing heaviest rain and the strongest wind up through the top of the country.

"Kicking off late this evening and running through until around about 6am on Friday we're expecting the most severe weather at the top of the country, so it could be a bit of a wild night in store for some of those northern areas."

"This is the time of year when we expect thunderstorm activity," she said. "We've got cooler air in the upper atmosphere, relatively warm at the bottom and those are conditions that are really good for producing thunderstorms and when you have thunderstorms, there is an increased risk of getting tornadoes as well."

The best thing to do in stormy weather was to stay indoors, she said.

It was monitoring the weather and had additional crews ready to respond to any power outages.

The risk was from trees coming into contact with powerlines and cars veering off wet roads hitting power poles.

Winds are increasing in Auckland now - gusting 40-50 knots (80-90 km/hr) - making for a windy commute home! Full details of the Watches in place for wind in Auckland can be found at https://t.co/bcFLKY4OUU and https://t.co/GZIq9Jlbrw ^GG pic.twitter.com/7eztsfXdIK

Further south, there was a heavy rain watch in place for the Bay of Plenty east of Whakatane, as well as Waitomo, Taupō, northern Taranaki, including the mountain and Taihape.

In the South Island, there's a road snow warning in place for State Highway 94 to Milford Sound.

On Friday, a low pressure system and an associated front are forecast to move over northern and central New Zealand from the west, MetService says.

"These weather systems are followed by a strong southwest flow that persists through the weekend, with an embedded front moving northwards over the country on Sunday."

If would like to share any weather pictures or video clips from where you are please email these to: iwitness@rnz.co.nz