Pressure for new housing in Upper Hutt has collided with locals' fear of flooding. 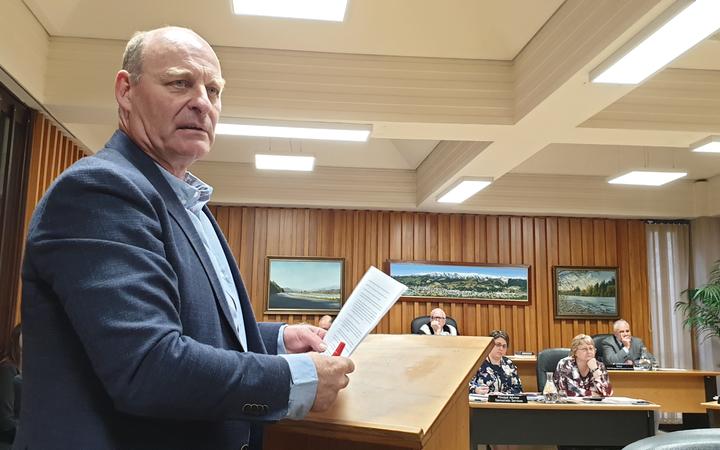 The city council has voted to activate a district plan change to address flood hazards caused by new subdivisions and rule out big developments in high hazard areas.

But opponents fear it is a trojan horse to make it easier for 1000 houses to be built on the Pinehaven hills, where runoff already causes frequent flooding down below.

Pinehaven architect Stephen Pattinson of lobby group Save Our Hills told a council meeting the flood modelling in the hazards mapping was wrong - that it overstated current runoff in a way that would disguise any additional runoff from houses built where 330 hectares of pine forests owned by the Guildford Timber Company are now.

"Council is trying to tell us that the Guildford development on the ... hills will amount to about a half percent increase in flood volume," Mr Pattinson said.

"Now our experts tell us, not half a percent, over 600 percent."

But councillor Ros Connelly told the meeting the move to address flooding risks in Plan Change 42 had been a long time coming.

"This is about protecting the houses in Pinehaven and Silverstream, not about trying to push through any incorrect data," she said.

"It has woven its way through the Environment Court and there's been support for the models."

The change backs up the council's rule that any new subdivision must be stormwater neutral - that runoff is no worse after houses and roads are built, than before it.

Other locals are known to simply want flood protection work to go ahead by Greater Wellington regional council and believe the lobbyists risk holding that up.

For Pinehaven, the city council and Guildford Timber signed a non-binding Memorandum of Understanding (MoU) three years ago to aim to do a land swap so housing could be built.

The 90-year-old timber company would get land to build a road up to the ridge where houses would go and in return give the council the steep slopes of forest below as public reserve.

The MoU remains current, but there was no formal agreement with the developer, the council told RNZ.

The lobbyists fear it could be 3500 plus a town centre.

The council considers the Pinehaven hills a "key strategic housing location"' for growth over the next 30 years, yet when RNZ asked if the council had received any more information from the developer since signing the MoU in 2016, it did not respond.

Council chief executive Peter Kelly said in a statement to RNZ: "1000 remains the current estimate, noting that no detailed proposal has been developed to Upper Hutt City Council's knowledge."

"This is based on the landowner estimate informed by their analysis of site constraints."

The council had signalled to Guildford that the appropriate process to consider future residential development was via a plan change process, it said.

Emails show the council told Save Our Hills' Stephen Pattinson that it held public consultation before signing the MoU.

After he questioned that, earlier this month the council apologised, saying in fact there was no public consultation.

"This was an administrative error," Mr Kelly said.

Mayor Wayne Guppy told the council that Plan Change 42 was a separate matter from any housing development, which would be closely controlled anyway.

"If there is any development in the hills, part of the conditions will be that they will have to prove stormwater neutrality," Mr Guppy said.

At issue is what that "neutrality" refers to.

Save Our Hills believes flawed flood modelling had greatly exaggerated the existing runoff, boosting the "neutrality" point, which would disguise any new runoff from housing where pines now stand.

"There is likely to be a couple of hundred thousand tonnes of additional storm runoff resulting from the proposed Guildford development on the hill," Sue Pattinson, Stephen Pattinson's wife, told councillors.

This came from new modelling the group had not released yet, she said, saying it was having it peer reviewed first because it was "more shocking than what we thought".

An audit done in 2015 by engineering firm Beca found the regional council's flood modelling was fit for purpose.

However, the audit also said the lobbyists had a point, and appeared to suggest that the impact of any big housing development was far from certain.

A 2010 hazards investigation that is the base of flood modelling, had used hydrology from consultants MWH that showed there would be more runoff from a development but no increase in flood volume.

"MWH ... have not been able to provide an explanation as to why there is not an increase in flood volume," the Beca audit said.

"While this does not affect the validity of flood extents defined for current development, it does invalidate the post-development flood extents and reduces community confidence in the flood mapping process."