Paekākāriki locals fear months of more car crashes and possible fatalities on State Highway 1 while they wait for Transmission Gully to open.

The monster roading project will divert much of the coast's traffic away from the beachside village north of Wellington when it opens next year, but for now, it's a busy corridor with more than 25,000 vehicles going through each day.

The intersection into the township is next to a busy railway line, opposite the treacherous Paekākāriki Hill Rd and making a right turn at any time is referred to as 'running the gauntlet'.

She said traffic lights would help, but added that New Zealand Transport Agency (NZTA) would not put them in as it would slow traffic down and cause congestion.

"We completely understand that, but is that worth risking people's lives?"

"It's been a long history with this intersection and a lot of people have had accidents here and we really need solutions ... we've been saying that for a long time." 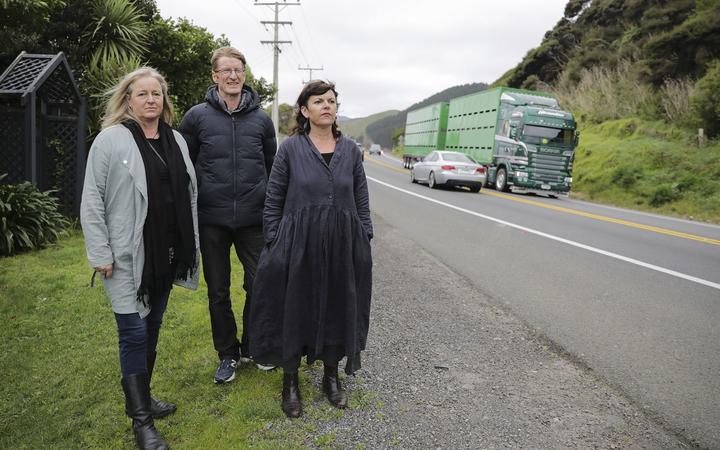 According to NZTA crash data, there have been 60 accidents at that intersection in the last 10 years.

Further up State Highway 1, community board member Holly Ewens pointed out another hotspot they wanted to be made safer - a bend where traffic started to speed up - and bordered by family homes.

"There's a lot of children who live in these houses who have to walk along here to the pedestrian walkway that crosses the railway line up and over to school.

She said residents were concerned about their children's safety while walking to school.

"One of the families, she has four children and some of them are in pushchairs, so can you imagine trying to get a pushchair [down here] ... it's quite terrifying."

Ms Ewens said it was not up to local board members to come up with all the answers, they just knew there was a problem.

"Back in February a car came off the road and took out a power pole here and it's just lucky that it hit the pole and it didn't hit a house. So I do know that [two properties] tried to build quite chunky fences because they have had cars go through their fences."

No solution in sight

NZTA regional transport systems manager Mark Owen admitted both pieces of road were complex, and said while nothing was in the pipeline immediately, things would get better once Transmission Gully opened.

"And then we can start to look at what the potential improvements are given there will be a lot less traffic and won't need to travel at the same speed because we won't have the efficiency issues that we have in terms of the highway corridor."

He said once Transmission Gully opened the road might be transferred to the local council which could look at reducing the speed down from 70 km/hr.

With regard to the bend further north, Mr Owen said NZTA had not been able to find a solution.

"We did look at some improvements a while ago to put up a safety barrier but we didn't get the full support of the community that live along there because they knew it was going to be difficult to access their properties off the highway.

"So you'd almost have to build a parallel road alongside the highway between the houses and the back of the barrier to make it safe and you'd have to then allow for people that walk along there as well so we haven't managed to get a solution that suits everybody's needs."

Ms Holborow and Ms Ewens both said that while the opening of Transmission Gully would no doubt decrease traffic, the community was still concerned with months of more right-hand turns to be made and dozens of days left walking to school.